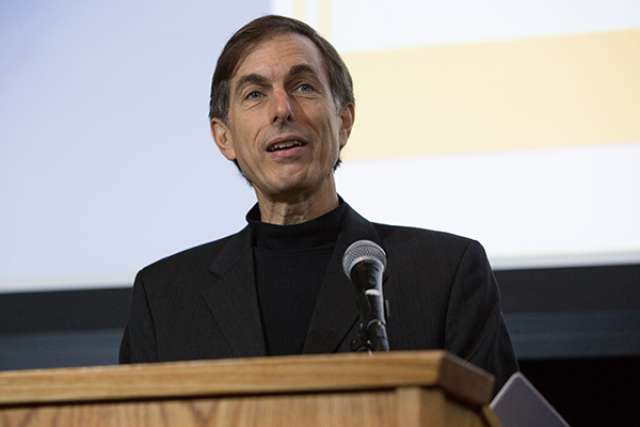 Steven Wallace, an internationally renowned scholar on aging in communities of color and immigrant health and health policy, has died. He was 63.

Among his important research and community-based projects with the UCLA Center for Health Policy Research, Wallace developed new approaches to assessing the economic security of older people through the California Elder Economic Security Standard Index, a tool that measures the actual cost of basic necessities for older adults, which was adopted into law in California and was used by the World Health Organization in its 2020 Decade of Healthy Aging report and will be used in California's master plan on aging. He also led teams that enhanced community organization capacity to advocate for better air quality in their neighborhoods and established resources for Los Angeles neighborhoods to increase smoke-free rental housing.

Wallace served as a professor of community health sciences at the UCLA Fielding School of Public Health for 31 years and as an associate director of the Center for Health Policy Research, which is housed in the Fielding School, for 25 years.

In both his research and fieldwork, Wallace worked to better understand the dynamics of social inequality and how it impacts health equity, as well as how policy and community approaches can improve health equity.

"Steve is widely recognized for introducing concepts such as the social determinants of health into discussions of health and social care for Latino and immigrant populations, the elderly and other vulnerable populations long before such ideas became mainstream," said Ron Brookmeyer, dean of the Fielding School of Public Health and distinguished professor of biostatistics.

Wallace's devotion to public health equity was also reflected in his unwavering commitment to increasing the diversity of the public health workforce and science more broadly, starting at the undergraduate level. Wallace served as director of a National Institutes of Health/National Institute on Aging-funded national coordinating center for the Resource Centers for Minority Aging Research, which mentors promising scholars from under-represented groups who pursue careers in areas of research related to aging.

Ninez Ponce, director of the Center for Health Policy Research, said Wallace's quarter century as associate director were "essential" to building the center into the successful policy research center it has been for more than two decades. In a message to the entire center community, she also shared his scholarly origin story.

"His interest in immigration started at an early age, listening to his grandfather's stories about coming to the U.S. through Ellis Island, and his father's memories of growing up in the immigrant neighborhood of Boyle Heights," Ponce wrote. "But it was an undergraduate summer internship in 1977 at a community health center where most of the patients were recent immigrants from Mexico that sparked his interest in an academic approach to the study of immigration and evolved into a storied career."

Wallace, who earned his doctorate at UC San Francisco, joined UCLA in 1990 as an assistant professor in the school of public health. From the beginning of his tenure at the school, he had an impact on students. In 1992 he was named faculty member of the year by the Public Health Student Association, and a few years later he received an outstanding mentor award from the UCLA Public Health Diversity Enrichment Program.

Memories of Wallace shared by current and former students across social media in the last week highlight his dedication to providing mentorship and guidance, collaborating on research and community partnerships, as well as his willingness to use his access to create pathways for others.

"Steve's door was always open to everyone — students, early career faculty members, and the rest of us," said Michael Prelip, professor and chair of the community health sciences department. "He was there to listen, ask the right questions, give the best advice, make you laugh, and be the absolute best friend and colleague. He was the complete package. He supported so many of us in so many ways and often when we didn't even know it. The department of community health sciences will never be the same."

Wallace was the principal investigator of the research on immigrant health and state policy study, known as RIGHTS, funded by the National Institutes of Health and National Institute on Minority Health and Health Disparities. The RIGHTS study aims to understand the experiences of exclusion that Asian and Latin American Californians have encountered in the areas of health care, social services, employment, education and law enforcement; how the state's policies and programs have shaped these experiences; and how such experiences influence people's ability to seek the health care they need. In late 2020, the NIH awarded additional funding to Wallace and his colleagues to study the multilevel influences on access to health care for Latino and Latina youth.

"For many of us, Steve was a model for all that is possible in training, service, teaching and mentorship. In my role as dean, I frequently turned to him for wisdom and advice," Brookmeyer said.

Wallace received numerous honors for his work, including a lifetime achievement award from the American Public Health Association Aging and Public Health Section in 2018 and the chair's citation for service in 2017. He earned a Fulbright fellowship to research and lecture in Chile, and in 2018, received the Mario Gutierrez Champion of Migrant Health award from the Health Initiative of the Americas.

"Many of his students, colleagues, and mentees have shared their stories of Steve — how he lifted them up and created space for them to thrive on their own strengths, his commitment to creating opportunities for women of color and other marginalized communities, his kindness and compassion, his beautiful soul, his smile and laugh that filled a room, his boundless generosity of spirit," said Ponce, who is also a professor of health policy and management in the Fielding School. "While each story is unique, they all share a common thread: Steve Wallace's impact is forever."

In lieu of flowers, Wallace's family invites contributions to the Steve Wallace Fellowship Fund at the UCLA Fielding School of Public Health, which intends to continue Wallace's commitment to mentoring first-generation students to become leaders in advancing public health policy. Contributions may be made securely online. Gifts may also be sent by check, made payable to "The UCLA Foundation" with the "Steve Wallace Fellowship Fund #16030" noted in the memo line and mailed to The UCLA Foundation, P.O. Box 7145, Pasadena, CA 91109-7145.