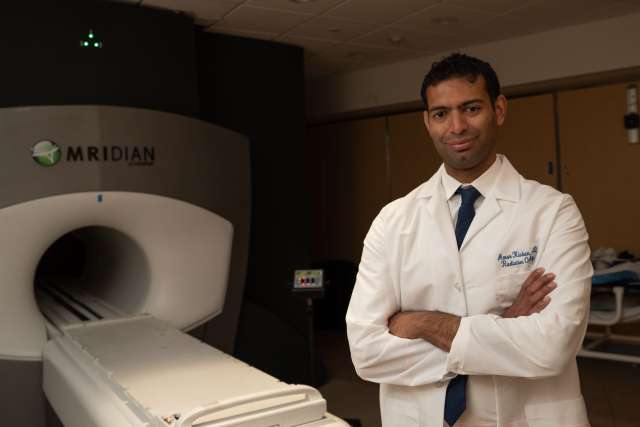 A new meta-analysis of randomized, controlled clinical trials provides strong support for adding androgen deprivation therapy (ADT) to definitive radiotherapy (RT) for the treatment of prostate cancer, projecting that doing so would prevent one cancer from metastasizing for every 10 to 15 men treated.

The analysis, published in Lancet Oncology, was conducted thorough the Meta-Analysis of Randomized Trials in Cancer of the Prostate (MARCAP) Consortium, a group formed in 2020 to serve as a data repository from international trial groups. The MARCAP consortium was co-founded by Dr. Amar Kishan of the UCLA Jonsson Comprehensive Cancer Center and chief of the Genitourinary Oncology Service for the Department of Radiation Oncology at the David Geffen School of Medicine at UCLA and Dr. Daniel Spratt, the chairman of the Department of Radiation Oncology at University Hospitals Seidman Cancer Center. The MARCAP consortium has data from multiple trials across the world and is the first consortium group of its kind for prostate cancer. Preliminary results were originally released in September 2021 at the annual meeting of the American Society for Radiation Oncology (ASTRO).

The analysis also finds that prolonging the time of administering ADT following radiation (so-called adjuvant ADT) to 18-36 months provides a similar benefit in terms of preventing metastatic disease. The benefits of both approaches were true regardless of patient age, RT dose (high vs. low), or prostate cancer risk group (high vs. intermediate risk). In contrast, prolonging ADT that begins before radiation (called “neoadjuvant ADT”) beyond two to three months did not improve any cancer outcome, prompting researchers to conclude that the latter treatment should not routinely be employed.

“I think these data are compelling for a few reasons,” said Kishan. “First, we can, for the first time, clearly quantify the benefits of adding ADT or prolonging the portion of ADT that comes after radiotherapy to help counsel patients. Second, we can highlight that there was no group of patients we found who did not experience some benefit from ADT, though the magnitude of the benefit might be small. And third, this consortium, which was founded in conjunction with Daniel Spratt at Case Western, has been years in the making and represents a truly international collaborative effort to answer questions in a meaningful and rigorous way. We hope to have many more reports to come over the next few years and look forward to growing the consortium.”

Because the male hormone testosterone is a known contributor to prostate cancer development, androgen deprivation is a strategy often considered among treatment options – especially for patients at high risk of recurrence and/or metastasis – as an adjunct to radiation therapy (RT). ADT can be given for short courses of four to six months or long courses of 18 to 36 months. Since the duration of ADT is much longer than the duration of a course of radiation, part of the hormone therapy will extend before radiation begins (called neoadjuvant), and part of it extends after the radiation has completed (called adjuvant).

Additional findings from subgroup analyses: There was no evidence of a treatment effect interaction between RT dose and the benefit of ADT use or adjuvant ADT prolongation. Thus, the benefit of adding either ADT or prolonging adjuvant ADT persists even if high dose radiation is used, and even for patients who have intermediate risk (rather than high risk) disease.

This analysis is believed to provide the strongest evidence to date supporting use of ADT as well as the prolongation of adjuvant ADT to at least 18 months in in conjunction with definitive radiation therapy for the treatment of localized prostate cancer. The relative benefit of ADT use and adjuvant ADT prolongation was consistent irrespective of radiation dose escalation. In contrast, prolonging neoadjuvant ADT beyond two months did not improve survival outcomes.

The lead authors are Dr. Amar Kishan, associate professor and vice chair of clinical and translational research at UCLA and chief of the Genitourinary Oncology Service for the Department of Radiation Oncology at the David Geffen School of Medicine at UCLA and the UCLA Jonsson Comprehensive Cancer Center, and Dr. Dan Spratt from University Hospital Seidman Cancer Center. Additional authors represent UCLA, University Hospitals, and other domestic and international organizations and institutions.