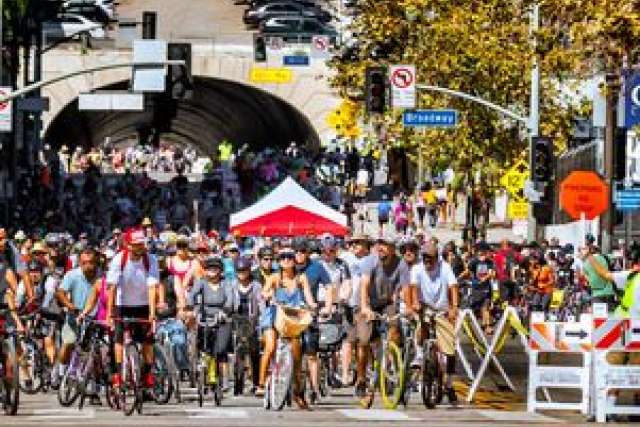 KPUPs Photography/Courtesy of CicLAvia<br>Researchers found that along the streets that were closed for CicLAvia, the presence of ultrafine particles in the air was 21 percent lower than normal.
October 19, 2015
Estimated read time: 3 minutes

Due in large part to the high volume of traffic that clogs the city’s streets and freeways, Los Angeles’ air quality is notoriously bad. And research has shown that fumes from all of those vehicles increase L.A. residents’ risk for respiratory and cardiovascular disease.

Downtown and East Los Angeles, in fact, are among the California communities with the worst environmental conditions according to an Office of Environmental Health Hazard Assessment report; both rank among the state’s bottom 10 percent.

For years, city officials, policymakers, environmentalists and others have introduced initiatives to encourage residents to reduce their use of cars and instead use alternative transportation, such as public transit, carpools, walking and cycling.

One example is CicLAvia, a series of one-day events organized by a local nonprofit in which neighborhood streets are closed to motor vehicles so that people can walk and cycle freely. According to the organization, more than 1 million people have participated in the 14 CicLAvias since the first one in October 2010.

Now, a study by the UCLA Fielding School of Public Health has found that the event significantly reduces air pollution along the CicLAvia route and even on other streets in the communities where the event is held.

The study, published in the peer-reviewed journal Environmental Pollution, measured air quality during the October 2014 CicLAvia, which was held in and around downtown L.A. — including the city’s Echo Park, Chinatown, Boyle Heights and East L.A. neighborhoods.

The researchers found that along the streets that were closed for CicLAvia, the presence of ultrafine particles was reduced by 21 percent and readings for particulate matter measuring 2.5 micrometers or smaller declined by 49 percent. In addition, particulate matter measurements on other streets in the neighborhoods that hosted the event (even though those streets were still open to traffic) were 12 percent lower on the day of the event, compared with non-event days.

“Los Angeles does not meet the EPA’s air quality goals, and traffic is a major source of the problem,” said Yifang Zhu, associate professor of environmental sciences at the Fielding School and the study’s principal investigator. “Not only does CicLAvia reduce the concentrations of traffic-emitted air pollutants, but we were also struck that the reduction of particulate pollution extends beyond the CicLAvia route.”

CicLAvia was inspired by a similar program that began 40 years ago in Bogota, Colombia. The Bogota events have been shown to promote physical activity, benefit public health and even boost sales for local businesses.

Particulate matter 2.5 micrometers and smaller is linked to respiratory and cardiovascular disease, lung cancer and premature death. Ultrafine particles are associated with a greater risk for respiratory and cardiovascular disease. Although ultrafine particles do not travel very far in the air, particulate matter at the size studied can spread over several hundred miles.

The researchers measured air quality and traffic on the day CicLAvia took place, as well as on the Sundays immediately before and after the event.

The authors acknowledge in the paper that three days of measurements might not be enough to accurately gauge CicLAvia’s effects on local air quality — and that additional measurements at future events are needed.

But the findings suggest that L.A. residents, and especially CicLAvia participants, would benefit from more open-street events, said Shi Shu, a postdoctoral researcher at the UCLA Fielding School of Public Health and the study’s lead investigator.

“The reduction of air pollutant concentrations is especially beneficial to the large number of event participants who rode their bicycles along the route, because their respiration rates were much higher than that of the pedestrians,” he said. “CicLAvia events should be held more frequently in the future.”

The study’s co-authors are Professor Emeritus John Froines and Brian Cole, an assistant adjunct professor, both of the Fielding School’s department of environmental health sciences; and Christina Batteate, a Fielding School project manager. The research was supported by BREATHE California of Los Angeles County (contract number 20151050).