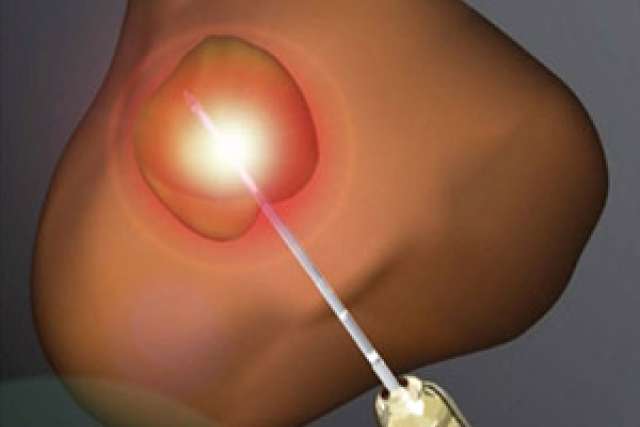 Prostate cancer patients may soon have a new option to treat their disease: laser heat. UCLA researchers have found that focal laser ablation – the precise application of heat via laser to a tumor – is both feasible and safe in men with intermediate risk prostate cancer.

The Phase 1 study, published June 10 in the peer-reviewed Journal of Urology, found no serious adverse effects or changes in urinary or sexual function six months after the procedure. The technique uses magnetic resonance imaging, or MRI, to guide the insertion of a laser fiber into cancerous tumors. When heated, the laser destroys the cancerous tissue.

A follow-up study, presented in a poster presentation at the American Urology Association meeting in May, showed the potential to transfer this treatment for the first time into a clinic setting, using a special device (Artemis) that combines both MRI and ultrasound for real-time imaging. The Artemis device arrived at UCLA in 2009. Since then, 2000 image-fusion biopsies have been performed – the most in the U.S. -  and this large experience has paved the way for treatment to be done in the same way.

If the laser technique, known as MRI-guided focal laser ablation, proves effective in further studies -- especially using the new MRI-ultrasound fusion machine -- it could  improve treatment options and outcomes for men treated for such cancers, said study senior author Dr. Leonard Marks, a professor of urology and director of the UCLA Active Surveillance Program. Historically, prostate cancer has been treated with surgery and radiation, which can result in serious side effects such as erectile dysfunction and urinary incontinence.

“Our feeling was that if you can see prostate cancer using the fusion MRI and can put a needle in the spot to biopsy it, why not stick a laser fiber in the tumor the same way to kill it,” Marks said. “This is akin to a lumpectomy for breast cancer. Instead of removing the whole organ, target just the cancer inside it. What we are doing with prostate cancer now is like using a sledgehammer to kill a flea.”

Up until now, capturing an image of a prostate cancer has been difficult because prostate tissue and tumor tissue are so similar. Precise, non-invasive surgical treatment has proved difficult as a result.

As the Journal of Urology study shows, however, MRI improves the ability of physicians to perform precise, laser-based treatment. The new fusion-imaging method improves it even further, providing real-time ultrasound that more clearly delineates the tumor. By combining laser ablation with this fusion-imaging technique, the potential of laser ablation grows enormously.

Previous research at UCLA has demonstrated the value of using the same fusion imaging technique to perform biopsies to diagnose prostate cancers in men with rising PSA who had multiple negative conventional biopsies. Such biopsies are usually “blind,” meaning physicians take a tissue sample based on what they believe is the location of a possible tumor.

The new Journal of Urology study provides proof of principle that laser ablation can be done safely and effectively with MRI. In this case, eight men underwent ablation while in an MRI machine. Although none had serious side effects, longer-term follow-up is needed, as is a continued assessment of appropriate treatment margins to ensure cure, the researchers said.

The second study tested the fusion-MRI procedure on 11 men in a clinical setting. That study found the procedure was well -tolerated under local anesthesia and resulted in no side effects. At four months follow-up, there were no changes in urinary or sexual function.

“This focal therapy provides a middle ground for men to choose between radical prostatectomy and active surveillance, between doing nothing and losing the prostate,” Marks said. “This is a new and exciting concept for prostate cancer treatment.”

The laser treatment is not yet approved for use in prostate cancer by the U.S. Food and Drug Administration.

“I think we were so successful in this effort because of the experience we gained doing the targeted biopsies,” Marks said. “That allowed us to go from biopsy to treatment.”

The studies were funded through private philanthropy and by a grant from Medtronic.

For more than 50 years, the urology specialists at UCLA have continued to break new ground and set the standards of care for patients suffering from urological conditions. In collaboration with research scientists, UCLA’s internationally renowned physicians are pioneering new, less invasive methods of delivering care that are more effective and less costly. UCLA’s is one of only a handful of urology programs in the country that offer kidney and pancreas transplantation. In July of 2015, UCLA Urology was ranked third in the nation by U.S. News & World Report. For more information, visit http://urology.ucla.edu/.