Laughter is the best medicine for jittery dental students 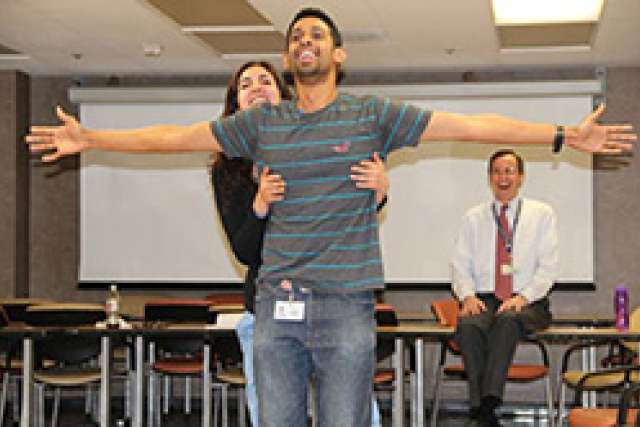 Seven students in a classroom at the UCLA School of Dentistry are cracking each other up.

In a course far removed from “The Fundamentals of Caries” and “Oral Pathology,” dental students pair off and take turns improvising scenes based on characters and situations suggested by their instructor and fellow classmates. Two students role-play madcap bank robbers. Another pair pretends to be obsessive-compulsive campers gushing over the high thread count of their bed sheets. Then there are the lovers who, stunned at the revelation that they have syphilis, respond by microwaving popcorn and tuning into Netflix.

It’s all part of the silliness that surfaces in “Medical Improv,” a highly unusual class that teaches dental students how to implant a bit of comedy improv into their personas. But it isn’t laughter they’re after, explained instructor Dr. Craig Woods.

Woods’ students don’t learn to perform funny routines to help their patients get rid of their pre-procedure jitters. To the contrary, the techniques they learn in class help them as dentists to “come out of themselves, be a little more relaxed and confident,” Woods said, especially when they start to work with live patients in the dental clinic for the first time.

Third-year student Roya Mahmoodi said she's already noticed a change in her chair-side manner. “When I first started in the clinic, I was very caught up in what I would say to my patient. I thought I had to have this very serious persona,” she said. “But being in this class — letting loose and just being silly — I’ve started bringing out my personality. I can kind of joke around with my patients, and I feel closer to them.

“There should always be a doctor-patient professional relationship,” Mahmoodi said, “but you can definitely tweak that relationship a little bit.”

Woods is as unusual as his class. He’s an adjunct professor of oral medicine and orofacial pain, director of the Advanced Treatment Planning Clinic and the dental school’s psychological counselor with an M.A. in clinical psychology on top of his D.D.S. He’s also a cast member of JumpStart Comedy, a Hermosa Beach-based troupe.

He got hooked on doing improv when, on a whim, he took a workshop about five years ago and liked it so much he enrolled in ImprovOlympic, a training program that also produced Tina Fey and Amy Poehler.

“I was amazed at the number of parallels there are in improv comedy to interacting with patients,” Woods said. “Improv comedy became a way to release stress and to enhance my skills at picking up on other people’s emotional cues in my professional life.”

His class is based in part on the Medical Improv program developed by Dr. Katie Watson, a physician educator at Northwestern University’s medical school. She’s also a trainer for Second City’s comedy improv program in Chicago. After Woods took a workshop with Watson, he decided to create a dental-school version to help the many bright students he has seen suffer self-confidence meltdowns in the clinics.

“Something happens when they get into their clinical instruction, where they have to interact with patients and perform a procedure while being supervised by faculty evaluating everything they do,” Woods said. “Their command of the situation falls apart.”

Gaining that sense of “command” is often less about taking charge and more about going with the flow, a skill that Woods gets across with exercises like “Search and Toss.” Standing in a circle, students “toss” the name of a country to another student, who “tosses” the name of another country to another student until everyone has a turn. Then Woods asked them to continue with the country names but weave in a second layer, this time with car names, and then a third layer with something they might tell a patient at the end of an appointment.

“Canada … Honda … Remember to floss.” “Austria … Chevy … Call me if you have any problems” went the dizzying exercise, the students starting to sweat – and giggle -- as they as they struggled to keep track.

In dentistry, it’s a familiar feeling, Woods said. “You’re juggling different things — seeing your patient, working with faculty and hearing from the front office that your next patient is waiting. Be open to crazy things coming up. Expect the unexpected” — like encountering a patient who swears she isn’t afraid of dentists but starts to cry the moment she sits down in the chair.

“You’re doing surgery in someone’s mouth,” Woods said. “You have to convince them that they need to allow you to put a drill in their mouth that’s going 400,000 rpm. You have to come across as being able to do that, and they have to have confidence and trust in you.”

Key to building trust is having deep listening skills that pick up not just words but emotional affect and body language. Confidence also comes through in clear, succinct communication. “Students have a tendency to ramble when they’re not comfortable,” said Woods, who took students through a scene where one explained a form of modern technology — an iPhone, for example — to another student who pretended to be a time-traveler from 250 years ago. The result: a huge download of incomprehensible information.

Keegan Quadros, a fourth-year student, commented that the exercise reminded him of talking with a patient about a procedure. “He doesn’t want to know everything … He just wants to know what it is, what it costs and what I recommend.”

Reena Guttha, a student from India, said she’s been working with a patient who likes to “crack jokes with me. But I don’t get it,” she said. “He knows that I don’t get it, and he’s okay with that. But I will enjoy my work more when I can communicate with patients like him and their sense of humor.”

Woods said he would like to expand the class to include medical and nursing students to enhance teamwork among medical professionals.

“Life is improvised,” Woods said. “Everyone could benefit from a course like this.”