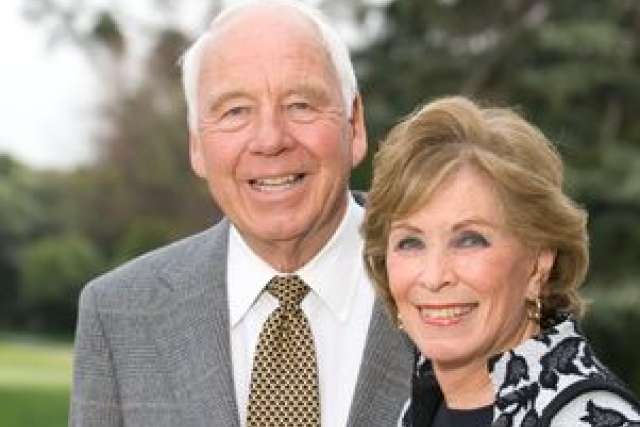 Brianna Aldrich
October 29, 2014
The Wilsons’ donation will establish the Bob and Marion Wilson Endowed Scholarship Fund, which will be used in support of annual scholarships to students who excel in the classroom and are dedicated to public service.

The Wilsons’ gift, which is the largest scholarship donation the dental school has ever received, comes at an optimal time, with state support having decreased substantially over the years. Scholarships help students defray educational expenses, ensuring that the broad array of professional options — including teaching, research and practice in underserved communities — remains open to each student after graduating.

“Being able to establish an endowed scholarship allows Marion and me to support future generations of dental students,” Bob Wilson said. “The UCLA School of Dentistry is a top choice among dental school applicants and our hope is that this donation will allow the school to support students who exhibit academic excellence and exemplary public service.”

The dental school attracts world-class students who go on to be leaders in the fields of oral and systemic health in California, the nation and the world.

The School of Dentistry awards an average of roughly $3 million per year in scholarships and grants to students. The Wilson endowed scholarship will increase the school’s ability to give even more financial aid.

“Increasing our scholarship endowment is one of our top priorities,” said Dr. No-Hee Park, dean of the UCLA School of Dentistry. “This very generous gift made by the Wilsons allows the school to reward those students who excel academically and give back to the community. I cannot thank the Wilsons enough for their investment in our students’ future.”

For nearly three decades, the Wilsons have been loyal supporters of the dental school. Bob Wilson is a dedicated member of the school’s board of counselors and now serves on the dean’s Centennial Campaign Cabinet for UCLA, which launched in May.

The Wilsons both attended UCLA. Bob graduated with a bachelor of science degree in 1953 and Marion graduated with a bachelor of arts degree in 1950. Bob went on to a successful career in commercial real estate development, and the couple has remained dedicated to helping their alma mater fulfill its mission of educational excellence. In 1989, they helped establish the Wilson-Jennings-Bloomfield UCLA Venice Dental Center, a community clinic that provides dental care to predominantly low-income patients.

The impact of the Wilson’s philanthropy is evident across the UCLA campus, most notably in Wilson Plaza, which was dedicated in their name in 2000 in recognition of their longtime generous support for the university. In 2006, they were awarded the UCLA Medal, the university's highest honor.

For everything that the couple has done for the School of Dentistry and UCLA, the dental school will recognize them as an official honoree at the dental school’s upcoming 50th Anniversary Gala event next spring.