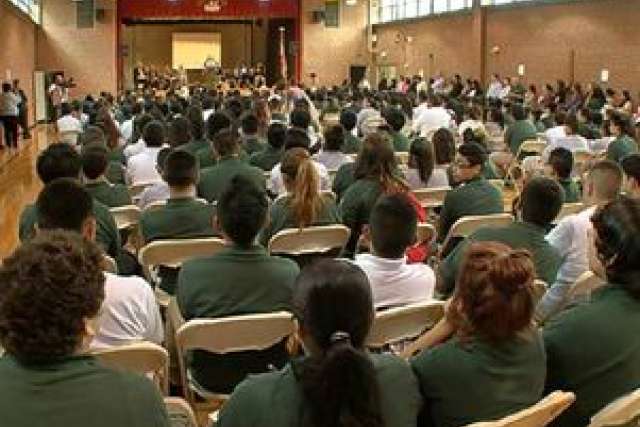 Low-income minority adolescents who were admitted to high-performing public charter high schools in Los Angeles were significantly less likely to engage in risky health behaviors than their peers who were not admitted to those schools, according to a new UCLA-led study.

While numerous previous studies have shown a link between health and K-12 education, the new study, published online July 21 in the peer-reviewed journal Pediatrics, is the first to examine how the quality of education influences the rate of high school students' risky health behaviors, said Dr. Mitchell Wong, the study's lead investigator.

"These students' higher cognitive skills may lead them to better health literacy and decision-making. They may be exposed to less negative peer pressure, and the school environment may promote the resilience that steers them away from these risky behaviors," said Wong, who is a professor of medicine in the division of general internal medicine and health services research. "In addition, in a better academic environment students spent more time studying, leaving them less time to engage in risky behaviors."

Wong's team examined students' likelihood to engage in behaviors that the researchers divided into two categories: risky and very risky.

"Risky behavior" was defined as any use of tobacco, alcohol and marijuana within the past 30 days.

The researchers compared two groups of high school students from low-income neighborhoods in Los Angeles — 521 students who were offered admission to high-performing public charter schools through the district lottery, and 409 who were not. Both groups were surveyed about their health behaviors, and their standardized test scores were compared.

Those students who were admitted to the high-performing schools went on to perform much better on standardized tests. In addition, significantly fewer of the charter school attendees — 36 percent versus 42 percent of those who did not attend charter schools — engaged in any very risky behaviors. But the researchers found no significant difference in whether students in the two groups engaged in other risky behaviors, such as alcohol and marijuana use.

The researchers also noted that students who changed schools or dropped out were more likely to engage in the very risky behaviors.

The authors concluded that successful public charter high schools in low-income neighborhoods can have beneficial health effects, and could help to close the growing academic achievement gap between wealthy and poor students.

From previous studies, it was difficult to determine whether poverty-related factors or quality of education were more responsible for determining students' health and health behaviors, Wong said.

There were some weaknesses to the study. For instance, the researchers focused mostly on low-income Latino students who applied to one of three public charter schools in Los Angeles, so the findings may not be applicable to other students, including those who do not apply to charter schools or those living in different areas. In addition, the authors had difficulty finding and interviewing students who were not accepted into charter schools.