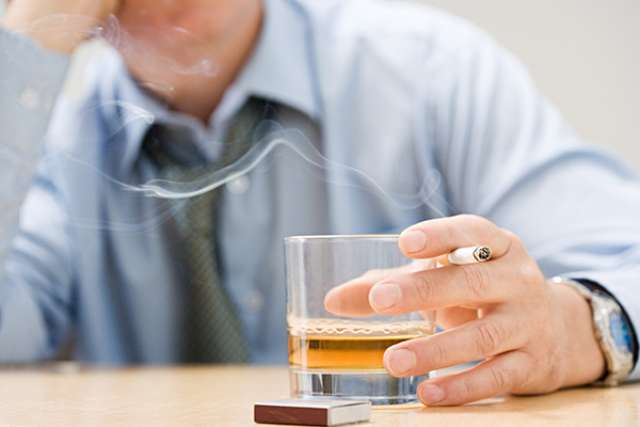 Even with the positive outcomes seen in the clinical trial, UCLA professor Lara Ray stresses that "medication is only part of the solution. There remains much research to be done on addictions and how to treat them."
June 15, 2021
Estimated read time: 4 minutes

A recent UCLA clinical trial has shown encouraging results in helping daily smokers who are also heavy drinkers quit smoking and cut down their alcohol intake.

The study of 165 people tested two prescription drugs — varenicline, for smoking addiction, and naltrexone, which is used to treat alcoholism. Studies have shown that varenicline, marketed under the brand name Chantix, may also be effective in reducing alcohol consumption.

Participants, who ranged in age from 21 to 65, smoked at least five cigarettes a day, with male participants generally consuming more than 14 drinks a week and women more than seven per week.

Over the 12-week study period, each participant received 2 milligrams of varenicline twice a day. Roughly half the group — 83 participants — also received a 50-milligram dose of naltrexone daily, while the other 82 received placebo pills. They were all told to quit smoking and drink less.

When researchers followed up 26 weeks after the study's conclusion, they found that nearly 36% — 59 participants — had quit smoking.

"The overall smoking quit rate in the trial is impressive," said lead author Lara Ray, a professor of psychology and of psychiatry and biobehavioral sciences who holds UCLA's Shirley M. Hatos Chair in Clinical Neuropharmacology. She noted that previous studies have suggested varenicline has a success rate at six months of about 25% to 30%.

"We exceeded the overall expectation for this medication," she said. "This is especially important in a diverse group of people." Ray said that while some previous studies have shown lower-than-average smoking cessation rates among Black participants, that was not the case in the current trial, in which more than half of participants were Black.

Surprisingly, the researchers said, those who had received varenicline plus a placebo had a significantly higher smoking quit rate (45%, or 37 of 82 participants) than those who were given varenicline and naltrexone (27%, or 22 of 83 participants).

"The quit rate for varenicline alone in this sample is highly encouraging, as this is the first large-scale trial of varenicline efficacy focused solely on heavy-drinking smokers," Ray said.

While participants who received varenicline plus naltrexone had a lower smoking quit rate, they had slightly better success than the placebo group at curbing their drinking. At the start of the study, participants averaged nearly seven drinks per drinking day; those on the varenicline-naltrexone combination reduced their consumption to three drinks per drinking day over the 12-week study period, while those receiving the varenicline-placebo combination cut down to four drinks — both impressive decreases, Ray said.

The study, which found no difference in quit and reduction rates between men and women, was published online in the American Journal of Psychiatry June 3 and is scheduled for publication in the journal's September print issue.

Approximately 20% to 25% of smokers are also heavy drinkers. Smoking and heavy drinking are major public health concerns that reduce people's life span and quality of life, and both have also been linked to worse health outcomes for COVID-19.

As with all addictions, quitting smoking and reducing drinking are difficult and complex processes. This study confirms that medications can play a role, Ray said, but she noted that it can be challenging for patients to take more than one prescribed medication

"Varenicline alone is doing a great job, and this trial indicates that there is not much room for naltrexone to make a difference," Ray said. "But even medications like varenicline have their limitations. Medication is only part of the solution. There remains much research to be done on addictions and how to treat them."

"There is evidence that varenicline can help them with both," Ray said. "Varenicline appears quite effective at reducing drinking and helping people to quit smoking. Given that varenicline has been found to reduce drinking in trials for alcohol use disorder, it is possible that its effects on both drinking and smoking present an optimal alternative for this group of heavy-drinking smokers."

ReJoyce Green, a UCLA doctoral student in clinical psychology who works with Ray, and Karen Miotto, a UCLA clinical professor of psychiatry and the medical director of the clinical trial, are among the study's 14 authors.

The study was conducted between July 2015 and December 2019 at an outpatient research facility at UCLA.