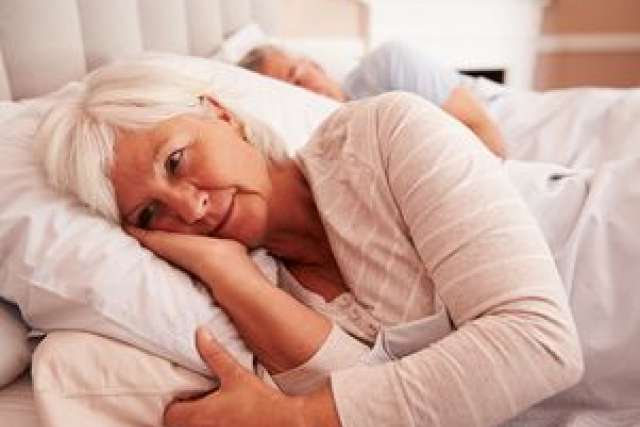 A new study by UCLA’s Steve Horvath is the first to demonstrate that menopause makes women age faster.

In a pair of studies published today UCLA researchers report that menopause accelerates biological aging and that insomnia, which often accompanies menopause, also has a clear association with age acceleration.

The dual findings suggest both factors could increase women’s risk for aging-related diseases and earlier death. The two studies, published in separate journals, contribute to increasing evidence of the biological clock’s variability.

The menopause study was published in the Proceedings of the National Academy of Sciences.

“For decades, scientists have disagreed over whether menopause causes aging or aging causes menopause,” said Steve Horvath, a professor of human genetics and biostatistics in the David Geffen School of Medicine at UCLA, and senior author on both studies. “It’s like the chicken or the egg: which came first?  Our study is the first to demonstrate that menopause makes you age faster.”

The sleep study was published in the online issue of the journal Biological Psychiatry.

Not getting restorative sleep may do more than just affect our functioning the next day, said Judith Carroll, an assistant professor of psychiatry at the UCLA Semel Institute for Neuroscience and Human Behavior and the Cousins Center for Psychoneuroimmunology, and first author of the sleep study.

“It might also influence the rate at which our biological clock ticks,” Carroll said. “In the women we studied, those reporting symptoms such as restless sleep, waking repeatedly at night, having difficulty falling asleep, and waking too early in the morning tended to be older biologically than women of similar chronological age who reported no symptoms.”

For their findings, both studies used a genetic “biological clock” developed by Horvath, which has become a widely used method for tracking the epigenetic shift in the genome. Epigenetics is the study of changes to DNA packaging that influence which genes are expressed but don’t affect the DNA sequence itself.

The menopause connection to speed of aging

In the menopause study, Horvath and first author Morgan Levine tracked methylation, a chemical biomarker linked to aging, to analyze DNA samples from more than 3,100 women enrolled in four large studies. The DNA samples included those from women participating in the Women’s Health Initiative a 15-year research program that addressed the most common causes of death, disability and poor quality of life in postmenopausal women. The researchers measured the biological age of cells from blood, saliva and inside the cheek, from all 3,100 women to explore the relationship between each woman’s chronological age and her body’s biological age.

“We discovered that menopause speeds up cellular aging by an average of 6 percent,” said Horvath, who is also a professor in the UCLA Fielding School of Public Health. “That doesn’t sound like much but it adds up over a woman’s lifespan.”

Take, for example, a woman who enters early menopause at age 42. Eight years later, he said, her body would be a full year older biologically than another 50-year-old woman who entered menopause naturally at age 50.

“The younger a woman is when she enters menopause, the faster her blood ages,” said Levine, a postdoctoral researcher in Horvath’s lab. “This is significant because a person’s blood may mirror what’s happening in other parts of the body, which could have implications for death and disease risk.”

In the sleep study, Carroll and her colleagues drew their data from more than 2,000 women in the Women’s Health Initiative. Using the epigenetic clock, they found that postmenopausal women with five insomnia symptoms were nearly two years older biologically than women the same chronological age with no insomnia symptoms.

“We can’t conclude definitively from our study that the insomnia symptoms lead to the increased epigenetic age, but these are powerful findings,” Carroll said. “However, our previous research did find that one night of partial sleep deprivation promoted cell damage that can increase susceptibility to biological aging, suggesting a causal connection. In the future, we will need to carry out studies of the same individuals over an extended period of time to determine whether chronic insomnia symptoms cause accelerated aging.”

While the menopause study is bad news for many women, especially those experiencing insomnia symptoms, Horvath suggests that scientists in the future may use the epigenetic clock as a diagnostic tool to evaluate the effects of therapies, like hormone therapy for menopause or behavioral treatments for insomnia.

Carroll suggests the findings from the sleep study are not all bad, highlighting an area in which people might be able to make modifications to their behavior to reduce risk.

“Sleep is rarely mentioned as a pillar of health, yet a considerable body of evidence suggests that good quality sleep may be just as important to one’s overall health as other lifestyle factors such as diet and exercise,” she said.

Anyone struggling with insomnia should seek medical advice, Carroll said. Several approaches have proven effective in tackling insomnia symptoms that many people suffer with, most notably cognitive behavioral therapy.

The other important question, which Carroll is studying, is whether we can slow, or even reverse, biological age by changing health behaviors, including improving sleep.

The take-home message is clear: “No longer will researchers need to follow patients for years to track their health and occurrence of diseases. Instead we can use the epigenetic clock to monitor their cells’ aging rate and to evaluate which therapies slow the biological aging process,” Horvath said. “This could greatly reduce the length and costs of clinical trials and speed benefits to all.”