UCLA studies reveal many don’t believe they need help, even if they have symptoms 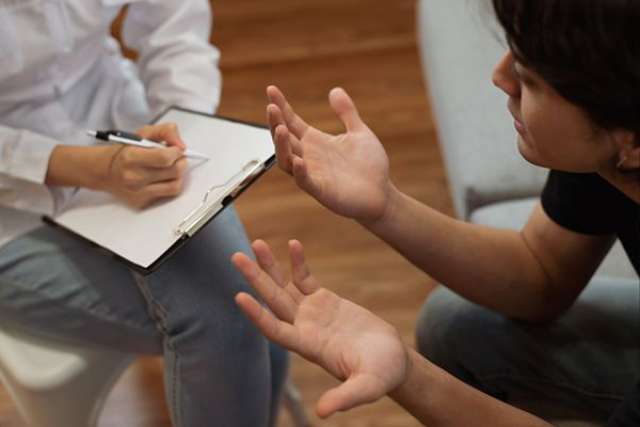 One conclusion of the reports: Members of the Latino and Asian American communities should be included in developing and delivering mental health services.

A pair of new UCLA studies suggest that mental health needs for some ethnic communities may be going unmet in part because people in those groups don’t see themselves as needing care — despite the fact that they are reporting in surveys that they are experiencing symptoms of mental health distress.

The studies, by th UCLA Center for Health Policy Research, are based on data from the center's own California Health Interview Surveys from 2015 to 2019.

The new studies focus on findings among Latino and Asian Americans, two of the state's most ethnically diverse groups. In the surveys, 20% of Latino adults and 18% of Asian American adults reported that they had serious or moderate psychological distress.

But measurably smaller percentages — 17% of Latinos and 14% of Asian Americans — reported that they believed they needed to see a professional for problems with mental health, emotions or nerves, or for the use of alcohol or drugs.

According to Susan Babey, co-author of the studies and senior research scientist at the center, other racial and ethnic groups in California likely also experience gaps in unmet mental health needs. But while previous studies have treated Latino and Asian American groups as monoliths, these reports take the unusual step of analyzing variations in those disparities across the state's Latino and Asian ethnic subgroups.

Those disparities — the gaps between the number of people who might need help and the number who realize or acknowledge that they need help — might seem small, but they suggest that state and local mental health agencies may need to do more to provide certain California communities with better information about recognizing and seeking help for mental health issues.

"The data also show that unmet need for services is higher among adults reporting symptoms associated with serious or moderate psychological distress than it is for adults who report that they know they need to see a professional, which is the strongest predictor of seeking care," said D. Imelda Padilla-Frausto, one of the lead authors of both studies and a research scientist at the center. "This is where mental health education can play a significant role: making sure people are aware of when and how to seek the care they need."

While the reports cover differences between Latinos and Asian Americans, the authors also emphasize that the numbers break down differently among the subgroups within the larger ethnic communities — a fact that could suggest more specifically where new mental health literacy resources should be deployed.

For example, they found, Californians of Filipino descent were more likely than those of Asian descent overall to report serious or moderate psychological distress (23%), as well as more likely to report that they needed care (19%).

The papers also include recommendations for improving access to mental health care for the state's Latino and Asian residents. Policymakers, the authors write, should implement outreach programs to better inform certain communities about how to recognize mental health issues and how to seek psychological care. Mental health information and resources should be available in culturally appropriate settings and using residents' primary languages. And officials should support better data collection that would help researchers identify community needs and help mental health educators and providers better tailor their services.

Padilla-Frausto said another critical step would be including members of the Latino and Asian American communities in developing and delivering mental health services.

"The studies reinforce that California can improve state- and local-level data collection," she said. "There are also opportunities to increase representation of these ethnic groups as part of a diverse mental health workforce and as decisionmakers when these types of programs and services are created."