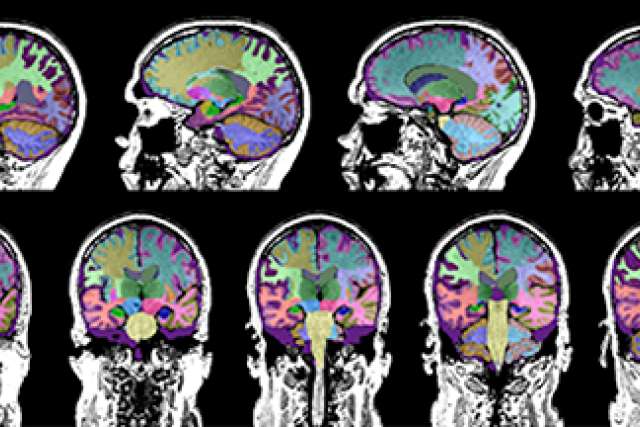 Using a software program, UCLA Health researchers were able to measure the volume of different regions of the brain, identifying areas where shrinkage may have occurred.

A UCLA-led study has found that MRI scans can help doctors distinguish whether a person's memory loss is being caused by Alzheimer's disease or by traumatic brain injury.

The study, which also involved researchers at Washington University in St. Louis, is important because it could help prevent doctors from misdiagnosing Alzheimer's disease — a diagnosis that can be devastating for patients and their families, and can prevent them from receiving appropriate treatment. (A 2016 study by researchers affiliated with the University of Toronto found that up to 21 percent of older adults with dementia may be misdiagnosed with Alzheimer's.)

The current study, published in the Journal of Alzheimer's disease, involved 40 patients whose average age was just under 68 and who were being treated by UCLA neurologists. All of the patients had suffered traumatic brain injury and later developed memory problems.

"We already knew that MRIs can reveal subtle abnormalities in patients with neurological disorders, such as Alzheimer's," said Dr. Somayeh Meysami, the study's lead author and a postdoctoral clinical research fellow in cognitive and behavioral neurology at the David Geffen School of Medicine at UCLA. "The purpose of our study was to evaluate whether MRI also could reveal distinct abnormalities in traumatic brain injury. And, if we could identify such a pattern, it would lead to improved diagnosis of TBI-related memory loss from other causes of dementia."

Using a software program to analyze the patients' MRIs, the researchers discovered that traumatic brain injury caused the most damage to a region of the brain known as the ventral diencephalon, which is associated with learning and emotions. They also found that the least amount of atrophy occurred in the hippocampus, which is involved in memory and emotions — and is the part of the brain that is most affected by Alzheimer's disease.

Dr. Cyrus Raji, the study's corresponding author and an assistant professor of radiology at Washington University, said one of the benefits of the approach is that it doesn't require specialized equipment beyond an MRI machine and the software the researchers used — so it could potentially be performed at many medical centers.

"The method we used to measure brain volumes in these individuals is useful because it can be applied on the same type of MRI scans we obtain in the clinic with no special type of imaging required," Raji said.

The Alzheimer's Association estimates that up to 40 percent of dementias are caused by conditions other than Alzheimer's. And according to the U.S. Centers for Disease Control and Prevention, 2.87 million Americans experienced traumatic brain injury in 2014, with the rates highest for people age 75 or older. Children age 4 and younger, and adults age 65 and older were most likely to suffer serious brain injuries after a fall.

"Our study offers further evidence that not all memory loss is caused by Alzheimer's disease," said Dr. Mario Mendez, a professor-in-residence of neurology, psychiatry and biobehavioral sciences at the Geffen School of Medicine. "It can be attributed to traumatic brain injury, as well as other dementias and neurodegenerative disorders."