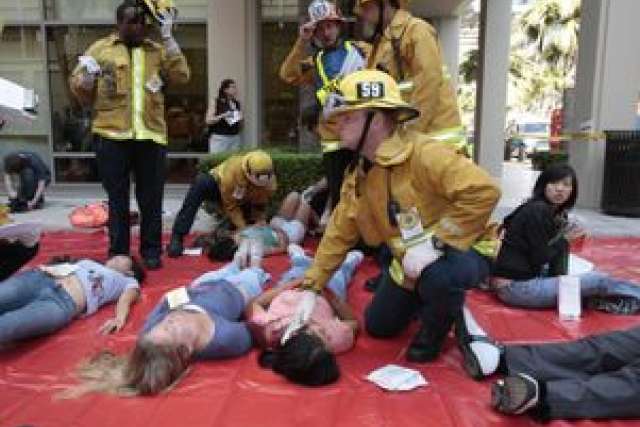 The scene played out on Tuesday morning in the residence hall area, with several agencies participating. UCLA Emergency Medical Services and Los Angeles Fire Department paramedics triaged the wounded and transported them to the Ronald Reagan UCLA Medical Center. UCPD and LAPD officers controlled the scene. SWAT teams from the LAPD and FBI stormed  Rieber Residence Hall, where the "incident" took place.

Life continued normally outside the drill zone, with students and cheerleaders from a summer camp walking nonchalantly past views of controlled chaos. Tennis stars at the Countrywide Tennis Classic played calmly despite booming "flash-bang" bombs used by the SWAT teams.

Some of the "wounded" students couldn't keep a straight face and giggled while being rescued, but many moaned in pain and competed for attention from paramedics. Elaborate makeup simulated blood and bullet wounds, based on the kinds of injuries sustained by victims of similar types of incidents.

First responders learned details about the scenario only as it unfolded to keep the drill realistic, UCPD Community Service Director Nancy Greenstein said. "They're really being challenged," she said.

The training exercise was designed to test the agencies and their ability to work together when faced by large-scale violence on a college campus, much like the deadly Virginia Tech campus shootings in April 2007, officials said. At a mid-day news conference, representatives from the agencies involved said they were pleased with the response they had seen so far.

"This is hopefully an exercise that will never have to take place in real life," said Los Angeles Mayor Antonio Villaraigosa. "But if it does, we'll know that we've done the best we can to simulate a disaster of this kind to prepare for it."