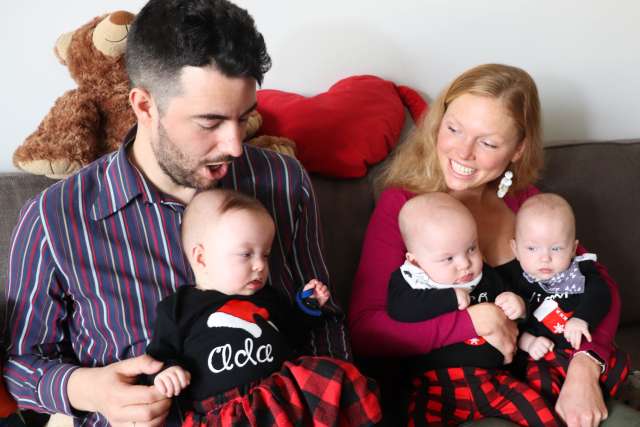 It's a Friday morning in January when Jana Gallus, 32, and Gregor Martynus, 35, peek their heads over their triplets' set of bassinets in their Westwood apartment. Six-month-olds Ada, Kian and Nico are just waking up, kicking with excitement and beaming from ear to ear.

It's a daily moment that Gallus and Martynus say doesn't get old. The triplets have come a long way since July, when they were born early, at 31 weeks, with weights ranging from 2.5 to 4 pounds. For 52 days, the trio were cared for in the neonatal intensive care unit, or NICU, at UCLA Mattel Children's Hospital.

As the UCLA team of nurses, physicians and staff monitored the triplets, the delicate newborns were met by another care team: a group of music therapists using an auditory device aimed at helping preemies develop, feed and grow.

Premature infants in the NICU — especially those born before 34 weeks — struggle with oral feeding. They typically haven’t developed the reflex to suck, breathe and swallow, which inhibits their ability to gain weight.

It's for this reason that music therapist Jenna Bollard sought to study whether a pacifier-activated lullaby device, or PAL, might help. The device is a white, rectangular object about the size of a shoebox with an electronic screen and a pacifier connected via a short cord. Its secret ingredient: the music it plays — a personal lullaby that parents write, sing and record for their baby with the help of UCLA's music therapists.

"Allowing parents to use their voice and the special song that they created on this medical device allows them to aid their baby in these very clinical-focused goals," said Bollard, manager of expressive arts therapies at UCLA Mattel Children's Hospital, who began the hospital's music therapy program in 2016 through a gift from the Peterson Family Foundation. The donor-funded program uses music-based interventions — such as lessons with instruments, therapeutic songwriting and sing-along sessions and relaxation during certain medical procedures — to address patients' social, emotional and psychological needs and support their medical care.

The PAL encourages preemies to strengthen their oral feeding by playing soft music that's appropriate for the baby's developmental stage — typically, below 60 decibels, with a repetitive cadence, and lacking unpredictable, jarring noises — when the baby sucks on the pacifier connected to the device. Bollard's research is intended to determine whether use of the device improves babies' abilities to feed on their own and gain weight naturally, thereby shortening the time they have to spend in the NICU. Early results from the research, which Bollard hopes to publish soon, suggest that 70 percent of participants increased their proficiency using a pacifier while the PAL was used.

Gallus and Martynus worked with Kristina Casale, a music therapist in the NICU, to write and record a lullaby to the tune of Bob Marley's "Three Little Birds," with each of the three verses made out to one of the triplets. (Casale's position is funded by a grant from The Music Man Foundation.)

Fiesty Little Kian
You smile like the rising sun
Your cute little nose
Wiggles in your sleep
We'll sing a sweet song
A melody pure and true
Singing: this is our message to you

For the families that participate in the program, the songwriting process can be an emotional one.

"They create these special songs with us by sharing what they want their baby to know, what they see in their baby's personality and what they dream of for their baby," Bollard said. "They get to express all of the emotions they're processing during what can be a very difficult time."

The research project also focused on the parents of preemies, who often face extreme stress in the NICU, where they can feel powerless to help their newborn.

"We would spend most of our days inside the NICU, visiting our babies and participating in the feeding," Gallus said, noting that this routine continued for almost eight weeks.

Parents who have participated in the research have reported that music therapy and the PAL device reduced their stress, made them feel more empowered in their situation and helped them feel more bonded with their baby.

"It helped us as parents, I think, just as much as it helped our babies," Martynus said. "We could only spend so much time in the NICU, and when we were not able to be there, it helped us to know that our babies would still hear our voices."

But among the many ways that clinical treatments help preemies in the NICU, Bollard and the medical staff at UCLA Mattel Children's Hospital note that parents are and will always be a crucial component to care.

"Parents make all the difference, and I often tell parents that they are the best part of this equation," said Shelly Frisco, a nurse in the NICU who works closely with Bollard and her team. "Technology can only do so much. We as medical practitioners can only do so much. However, you are your baby's best medicine."

Ada, Kian and Nico — now sitting side-by-side in mom's and dad's laps — let out soft giggles as Bollard and Casale serenade them with the lullaby their parents wrote while they were in the NICU. The three babies are happy, energetic and certainly well-fed. (Gallus and Martynus, who have the practice of rearing triplets down to a science, have an entire separate freezer stocked with breast milk.)

"They are all healthy and are doing so well," Gallus said. "There's really nothing more we could wish for."