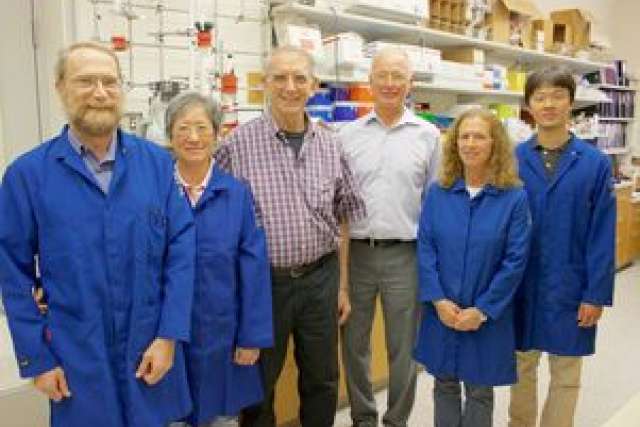 Scientists from the California NanoSystems Institute at UCLA have developed a nanoparticle delivery system for the antibiotic moxifloxacin that vastly improves the drug’s effectiveness against pneumonic tularemia, a type of pneumonia caused by inhalation of the bacterium Francisella tularensis.

The study, which appears in the journal ACS Nano, shows how the nanoparticle system targets the precise cells infected by the bacteria and maximizes the amount of drug delivered to those cells.

Jeffrey Zink, distinguished professor of chemistry and biochemistry and a senior author on the study, developed the mesoporous silica nanoparticles used for drug delivery. Zink and his research team conducted an exhaustive process to find the best particle for the job.

“The nanoparticles are full of deep empty pores,” Zink said. “We place the particles in drug solution overnight, filling the pores with drug molecules. We then block the pore openings on the nanoparticle’s surface with molecules called nanovalves, sealing the drug inside the nanoparticle.”

When the drug-bearing nanoparticles are injected into the infected animal, in this case a mouse, the drug stays in the nanoparticles until they reach their target: white blood cells called macrophages. Macrophages ingest nanoparticles into compartments that have an acidic environment. The nanovalves, which are designed to open in response to the more acidic surroundings, then release the drug.

“We tested several different particles and nanovalves until we found the ones that would carry the maximum amount of drug and release it at just the right pH value,” Zink said.

The F. tularensis bacterium is highly infectious and has been designated a top-tier bioterrorism agent by the Centers for Disease control, meaning that it is considered to pose a high risk to national security and public health.

“F. tularensis survives and multiplies within macrophages, especially those in the liver, spleen and lung,” said Marcus Horwitz, a distinguished professor of medicine and microbiology, immunology and molecular genetics and the study’s other senior author. “Macrophages readily devour mesoporous silica nanoparticles, making these particles ideal for treating these types of infections.”

Moxifloxacin is a powerful treatment for tularemia, but it has side effects when administered as a free drug in the bloodstream. The UCLA researchers worked to maximize the efficacy of the treatment while reducing side effects.

“When you give a drug freely in the blood, only 1 or 2 percent of it gets to where you want it to go,” Horwitz said. “With this system, the drug is contained inside the nanoparticles until they are inside macrophages, delivering a much larger amount of the drug directly to the site of infection.”

Horwitz added that freely flowing drugs are metabolized and excreted from the moment they are administered, whereas nanoparticles protect drug molecules from metabolism and excretion until after their release in the target cells, making nanotherapeutics potentially very potent.

The nanoparticle delivery system has the potential to maximize antibiotic effectiveness and reduce side effects in other infectious diseases including tuberculosis, Q fever and Legionnaires’ disease.

The study’s other authors were Zilu Li, a graduate student in the Zink lab; and Daniel Clemens, an adjunct associate professor of medicine; Bai-Yu Lee, an associate researcher; and Barbara Jane Dillon, a staff research associate, all of whom are in the Horwitz lab.

Confocal microscopy was provided by the Advanced Light Microscopy Technology Center of the California NanoSystems Institute at UCLA.

This research was supported by the Defense Threat Reduction Agency of the Department of Defense.