Nationally lauded medical educator invests in success of his students 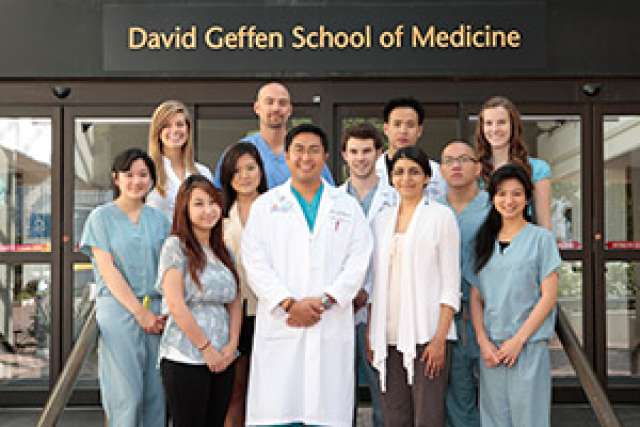 By being an exceptional teacher and mentor, UCLA neurosurgeon Isaac Yang is paying it forward, giving to future generations of doctors what he was fortunate enough to have when he was growing up.

"The reason why I teach and mentor is because I've had good teachers and mentors," Dr. Yang explained. “My teachers made me who I am — they made something out of nothing.  I wasn’t strong in one particular area; I simply had role models who inspired and encouraged me along the way.”

Yang, who teaches at the David Geffen School of Medicine at UCLA, has been honored by the American Medical Student Association with its National Golden Apple Award for Teaching Excellence.  He received his award on Feb. 28 at the association's 65th annual convention in Washington, D.C.

"The thing that pleases me most about winning this award is that it comes from the medical students," said Yang, 37. "It’s not a nomination by my peers or other teachers; this is a nomination from the students in the field that I teach. To be recognized by them as a good teacher means a lot to me."

Since 1996, the National Golden Apple Award has been given medical school professors who significantly enhanced the value of the medical education their students received from their course work. Chosen this year from more than 100 local Golden Apple recipients, Yang impressed the judges with the variety and depth of his experience, as well as with his contributions to medical education, noting that he had influenced a large number of students.

“UCLA heartily congratulates Dr. Yang on this wonderful award,” said Dr. Clarence Braddock, vice dean for education at the Geffen School of Medicine and chief medical education officer for the UCLA Health System. “It is a well-deserved recognition for his immense contributions to the teaching and mentorship of the next generation of physician leaders.  We are deeply grateful to have him on our team.”

The eldest son of South Korean immigrants, Yang was born in Chicago and reared in Lodi, an agricultural community in central California.  His parents settled there after his father was accepted for a residency in obstetrics and gynecology at San Joaquin General Hospital.

"Growing up in a small town like Lodi taught me the value of community and relationships," said Yang.

With his great-grandfather, grandfather and father all physicians, a career in medicine came naturally to Yang.

"My parents emphasized that what you do isn't about a paycheck, but about making a difference in the lives of our families, our schools and our communities," he said. In addition to helping patients, one of the ways he makes a difference is through teaching.

As a teacher, Yang emphasizes humanism within medicine and is most proud of his co- authorship of a textbook, “The Service-Minded Physician.”  Distributed to incoming medical students at several schools, the book serves as a human-relationships compass for physician trainees as they work to help underserved patients around the globe.

"Becoming a physician is an amazing societal responsibility," Yang said. "The textbook helps new medical students remember why they are becoming doctors. It's about being on the front lines to help relieve suffering in the world."

Yang graduated Phi Beta Kappa from the UC Berkeley in 2000 with a double degree in molecular cell biology and social welfare. He earned his medical degree at UCLA in 2004 prior to completing an internship in general surgery at the UC San Francisco. After serving a residency in neurological surgery there, he joined the UCLA Department of Neurosurgery as a tenure-track faculty member in 2010.

Currently Yang serves as a principal investigator for the brain-tumor program at UCLA's Jonsson Comprehensive Cancer Center and as the lead neurosurgeon for the acoustic neuroma program. He also is the neurosurgery department’s director of medical school education and a co-chair for the medical neuroscience block.

First-year medical student Nolan Ung was mentored by Yang during his undergraduate education. According to Ung, Yang is a patient, hands-on leader, who’s often seen in the company of medical students and residents.

“Despite his clinical and academic responsibilities, Dr. Yang is always willing to help us with our scholastic and personal challenges,” said Ung. "He devotes an immense amount of time and passion to our well-being. At the end of my undergraduate career, I felt his deep investment in my success."

Yang has nurtured an appreciation for teaching that dates back to his own years as a student. Recalling the contributions of those who inspired him, he strives to nurture his own students in the same way.

“Now that I'm in the position to teach, I feel a delightful responsibility to inspire and encourage those who are following me,” he added.  “There's nothing more fulfilling than being able to help mold the next generation of physicians.”