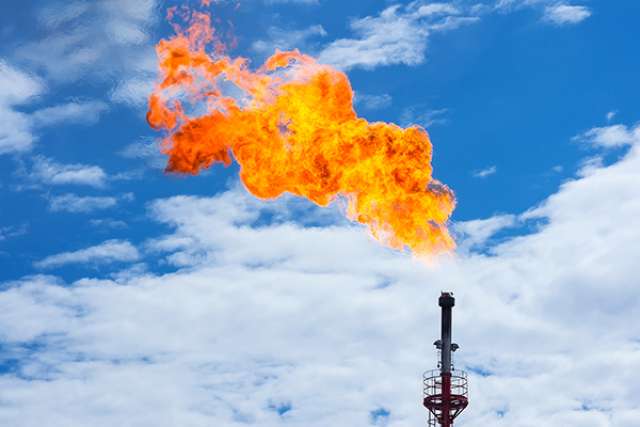 Researchers from the UCLA Fielding School of Public Health and the University of Southern California have found that a high level of exposure to oil and gas "flaring" events — the burning off of excess natural gas at production sites — is associated with a 50% higher risk for preterm birth, compared with women who aren't exposed to flaring.

The researchers defined a high level of exposure as 10 or more nightly flare events within a distance of 5 kilometers (about 3 miles) of the woman's home.

"Prior studies suggest living near oil and gas wells adversely affects birth outcomes, but no studies had yet examined flaring — the open combustion of natural gas," said Lara Cushing, an environmental health scientist at the Fielding School and the study's co-lead author. "Our findings suggest that living within three miles of flaring adversely impacts pregnant women and infants."

The study is published today in the journal Environmental Health Perspectives. Researchers examined 23,487 live single births to women living within Texas' Eagle Ford Shale between 2012 and 2015. The Eagle Ford Shale, measuring 50 miles wide and 400 miles long, is one of the nation's most productive oil and gas regions, due to unconventional drilling practices such as hydraulic fracturing, commonly referred to as fracking. In a previous study, the research team estimated the area was subject to more than 43,000 flaring events between 2012 and 2016.

Of those births, 10.6% were preterm, meaning that they occurred before the end of the 37th week of pregnancy. Preterm birth is associated with complications such as immature lungs, difficulty regulating body temperature, poor feeding and slow weight gain.

"The fact that much of the region is low income, and that approximately 50% of residents living within three miles of an oil or gas well are people of color, raises environmental justice concerns about the oil and gas boom in south Texas," said Jill Johnston, an environmental health scientist at the USC Keck School of Medicine, who co-led the study. "Measures to minimize flaring — such as more stringent regulation of flaring or investments in renewable energy and energy efficiency measures that reduce reliance on fossil fuels overall — would protect the health of infants."

Flares have been shown to release a variety of chemicals, such as benzene, as well as fine particle pollution, carbon monoxide, nitrogen oxides, heavy metals and black carbon. Several of those combustion-related pollutants have been associated with a higher risk for preterm births and reduced birthweight in other contexts.

The researchers used satellite observations to measure flaring activity because systemic reporting of flaring is lacking. The team adjusted for other known risk factors for preterm birth, including age, smoking, insurance status and access to prenatal care.

Women who lived within 5 kilometers (about 3 miles) of a larger number of oil and gas wells also had a higher risk for a preterm birth than mothers who lived farther away. Their babies were also born weighing 19.4 grams (7 ounces) lighter on average. That suggests that, in addition to flaring, other types of exposure to oil and gas wells may also be adversely affecting pregnancies, the researchers said.

Fifty-five percent of the women in the study identified as Latina or Hispanic, and the risk for preterm birth among Hispanic women exposed to high levels of flaring was greater than it was for non-Hispanic white women, who made up 37% of the study.

80% of flaring in the U.S. occurs in the Texas and North Dakota shale plays, where much of the nation's unconventional oil production occurs. But the practice remains largely underreported and unregulated, the researchers wrote.

The study's other authors are Kate Vavra-Musser, Khang Chau and Meredith Franklin, all of USC. The research was supported by a grant from the National Institutes of Health/National Institute of Environmental Health Sciences.