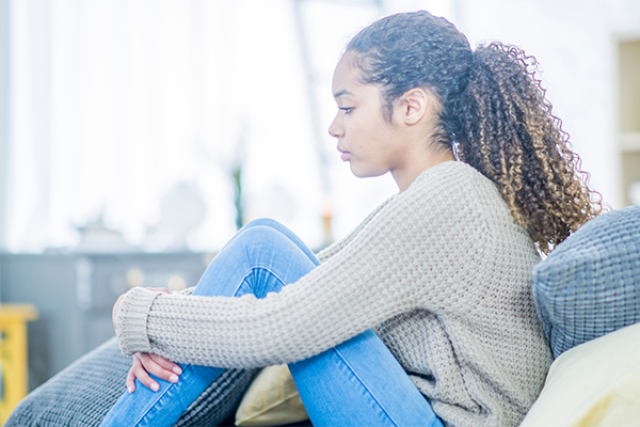 Mirroring a national trend, 45% of California youth between the ages of 12 and 17 report having recently struggled with mental health issues, with nearly a third of them experiencing serious psychological distress that could interfere with their academic and social functioning, according to a UCLA policy brief released today.

The UCLA Center for Health Policy Research study also highlights the elevated incidence of mental health distress among certain segments of the adolescent population — including poor, multiracial, gender-nonconforming and foreign-born young people — and recommends policies to address these inequities and boost access to mental health services.

"With almost half of California's adolescents experiencing moderate to serious psychological distress, there is an urgent need to protect their psychological and emotional well-being by addressing the structural and social factors related to inequities in mental health," said D. Imelda Padilla-Frausto, the study's co-lead author and a research scientist at the center.

Using data from the center's 2019 California Health Interview Survey, the study authors looked at social determinants of health — non-medical factors such as family income, insurance, race and ethnicity, and citizenship status — to determine which adolescents were most affected by mental health distress. They also examined the impact of adolescents' physical health and behavior in areas such as eating habits, physical activity, social media use and substance use, including drinking and smoking.

The study's key findings include:

The authors also found that adolescents who used social media almost constantly, ate less than five servings of fruits and vegetables per day, had tried marijuana or had engaged in binge drinking were more likely to report experiencing serious psychological distress.

If not treated early and properly, the researchers stress, mental health problems can seriously impair a youth's progress socially and academically and have long-lasting negative consequences in adulthood. It is imperative, they say, to increase access to mental health treatments for all adolescents and to improve preventive measures for those groups at particularly high risk.

The study authors urge federal, state and local policymakers, and those who work with adolescents and their families, to champion policies and programs that will help reduce socioeconomic inequalities, increase access to mental health services in schools, help parents better understand mental health issues, promote health care models that incorporate both primary care and mental health needs, and provide increased mental health training for those in law enforcement.

"Addressing these needs using a multifaceted approach enables service providers and other people in the adolescents' networks to help prevent issues of psychological distress, not only through treatment but by placing aid in the settings that adolescents are already present in, which can increase access help," said Blanche Wright, lead author of the study and doctoral student in the UCLA Clinical Psychology program.

The researchers also emphasize the need to continue telehealth or virtual-based health services and the importance of mental health research, especially in the midst of the current pandemic, which is taking a toll on adolescents' physical and emotional well-being.

"If we take a look at the bigger picture of what's happening in the state and country as far as the COVID-19 pandemic, it is critical to prioritize and conduct research on mental health," Padilla-Frausto said. "In particular, the structural determinants that lead to socioeconomic inequities related to poor mental health need to be addressed in order to guide efforts that will provide much-needed assistance to at-risk populations, and this will ensure that dedicated support can work synergistically with an often underfunded and overstretched mental health system."

The UCLA Center for Health Policy Research will host a webinar (registration required) on the findings from this study on Wednesday, Jan. 27, at noon.