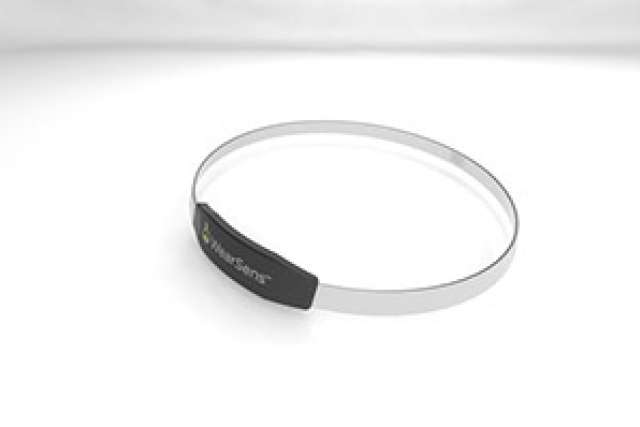 WearSens rests loosely above the sternum and uses highly sensitive sensors to capture vibrations from the action of swallowing.

A sophisticated necklace developed by researchers at the UCLA Henry Samueli School of Engineering and Applied Science can monitor food and drink intake, which could help wearers track and improve their dietary habits.

The inventors of the WearSens device say it could help battle obesity, heart disease, diabetes and other problems related to nutrition.

Majid Sarrafzadeh, a distinguished professor of computer science and co-director of UCLA’s Wireless Health Institute, led a team that created the device and an algorithm that translates data from the necklace, and tested it on 30 people who ate a variety of foods.

The research was published online by the IEEE Sensors Journal.

“Today, many people try to track their food intake with journals, but this is often not effective or convenient,” Sarrafzadeh said. “This technology allows individuals and health care professionals to monitor intake with greater accuracy and more immediacy.”

WearSens rests loosely above the sternum and uses highly sensitive piezoelectric sensors to capture vibrations from the action of swallowing. Piezoelectric sensors produce voltage based on the mechanical stress — or movement or pressure — that is applied to them.

When the wearer eats or drinks, skin and muscle motion from the lower trachea trigger the sensors, and the necklace transmits the signals to a smartphone, where the UCLA-developed algorithm converts the data into information about the food or beverage. The phone displays data about the volume of food or liquid consumed and can offer advice or analysis; for example, that the wearer is eating more than in previous days or that the person should drink more water.

With the WearSens device, the sensor information is translated using a spectrogram, which offers a visual representation of vibrations picked up by the sensors. Spectrograms are often used in speech therapy and seismology, among other applications.

“The breakthroughs are in the design of the necklace, which is simple and does not interfere with daily activity, and in identifying statistical measures that distinguish food intake based on spectrogram images generated from piezoelectric sensor signals,” said Nabil Alshurafa, a graduate student researcher at UCLA who is a co-inventor of the device and the first author of the research.

The team is continuing to refine the algorithms and the necklace’s design. The researchers hope WearSens will be available to the public later this year.

The technology is available for licensing via the UCLA Office of Intellectual Property and Industry-Sponsored Research, which facilitates the conversion of UCLA research to benefit the public.

The research was supported by the National Science Foundation.&nbs