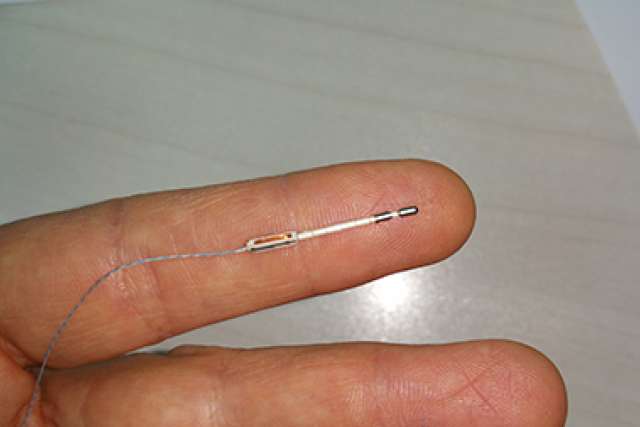 The treatment uses a small neurostimulator electrode that is temporarily implanted through the roof of the mouth.

Research led by a UCLA scientist found that a new nerve stimulation therapy to increase blood flow could help patients with the most common type of stroke up to 24 hours after onset.

A study of 1,000 patients found evidence that the technique, called active nerve cell cluster stimulation, reduced the patients' degree of disability three months after they suffered an acute cortical ischemic stroke, which affects the surface of the brain.

Dr. Jeffrey Saver, director of the UCLA Comprehensive Stroke Center, was the co-principal investigator of the study, which was conducted at 73 medical centers in 18 countries.

"We believe this represents the advent of an entirely new treatment for patients with acute ischemic stroke," said Saver, who also is senior associate vice chair for clinical research in neurology at the David Geffen School of Medicine at UCLA. The study is published today in The Lancet.

Unlike the two currently approved therapies for acute stroke, which open blocked arteries by dissolving or removing a clot, the new approach applies electrical stimulation to nerve cells behind the nose, increasing blood flow in the brain by dilating undamaged arteries and bypassing the blockage to treat the threatened region of the brain.

In previous studies to understand the mechanism by which the treatment would work, scientists found that the nerve cell cluster stimulation not only increases blood flow, but also preserves the blood-brain barrier, which prevents brain swelling. It also improved neurons' ability to compensate for injury and form new connections.

In a study subset of 520 people who had major deficits and confirmed injury to the cerebral cortex, 40% of those who did not have the stimulation had favorable outcomes, versus 50% of those who did have the stimulation. Although those results fell just short of statistical significance, when the data are combined with similar findings from an earlier trial, the cumulative statistics indicate that the therapy is effective when administered eight to 24 hours after the onset of a cortical acute ischemic stroke.

The treatment uses a small neurostimulator electrode that is temporarily implanted through the roof of the mouth. (The implant requires only local anesthesia.) During the study, the electrode actively stimulated the nerve cell cluster four hours a day for five consecutive days.

The first treatment for ischemic stroke, the clot-dissolving drug alteplase, was approved by the Food and Drug Administration in 1996. When administered soon after onset, the drug, which is also called tPA, can sometimes clear a blocked artery, restore blood flow and avert stroke damage. However, its effectiveness diminishes if treatment is delayed beyond three hours, it does not work for all patients, and some people have conditions that preclude its use.

More recently, the FDA has approved clot-retrieval devices that are threaded through arteries to capture and remove blockages. Used alone or in conjunction with tPA, those devices have extended treatment time to 24 hours after the onset of stroke in some patients, although earlier treatment is more effective. But the devices require expertise that may be absent outside of major medical centers.

"Stroke continues to be a major cause of death and disability in the United States and around the world, making it imperative that we develop new, effective treatments to complement existing therapies, including in the extended treatment window," Saver said.

Saver and Dr. Natan Bornstein of Tel Aviv University and the Shaare Zedek Medical Center in Israel, were the study's co-first authors.

The research was funded by device manufacturer BrainsGate Ltd. Saver, Bornstein and other authors were paid by BrainsGate for serving on a steering committee that provided guidance on the study's design and approach.