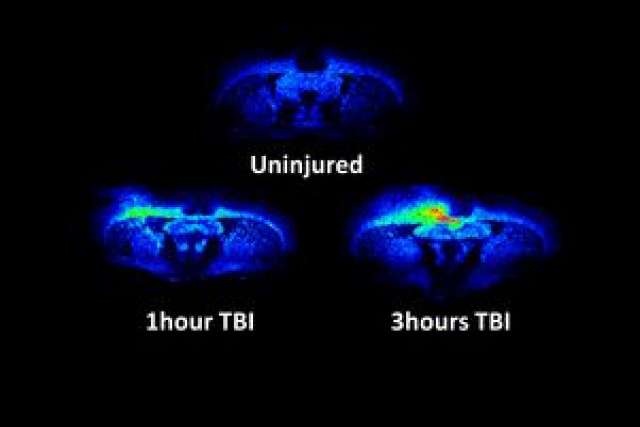 A new UCLA study in rats shows that levels of a molecule called LPA rise quickly in several sites of the brain after traumatic brain injury, or TBI, suggesting a possible route to development of a diagnostic blood test for humans.

The findings are consistent with previous research detecting higher concentrations of LPA in the blood after a brain injury, as well as in cerebrospinal fluid following spinal-cord injury. Because traumatic brain injury can produce a variety of symptoms, it can be difficult for doctors to accurately evaluate the severity of the trauma or predict the duration of the injury.

The American Journal of Pathology published the findings.

"Neuroscientists have long searched for a non-invasive biomarker that would enable doctors to predict brain injury severity, identify the urgency for intervention and advise patients how long they should refrain from sports or work," said lead author Neil Harris, a professor of neurosurgery at the David Geffen School of Medicine at UCLA. "Our findings suggest that LPA may be a strong candidate for the job."

Harris and his colleagues used sophisticated imaging technology to measure subtle changes in LPA levels in the brains of deceased rats, then linked these findings to signs of cellular damage.

Concentrations of LPA increased throughout the brain within one hour after brain trauma. Three hours after injury, high levels of LPA were noted in regions linked to neuron death and axonal damage. Axons are nerve fibers that conduct electrical impulses away from the brain cells. Both neuron death and axonal damage are symptoms of traumatic brain injury.

"Our data suggests that rising LPA levels are part of the brain's early response to acute injury and trigger TBI's later sequence of tissue atrophy and cognitive impairment," Harris said. "This indicates that LPA may prove a useful biomarker for cell death after brain trauma."

Harris plans to explore how LPA levels in the blood correlate to their presence in brain tissue after injury.

According to the Centers for Disease Control and Prevention, traumatic brain injury led to about 2.8 million emergency room visits, hospitalizations and deaths in the United States in 2013.