In UCLA study, magnetic stimulation of lower spine eliminates need for catheter for up to 4 weeks 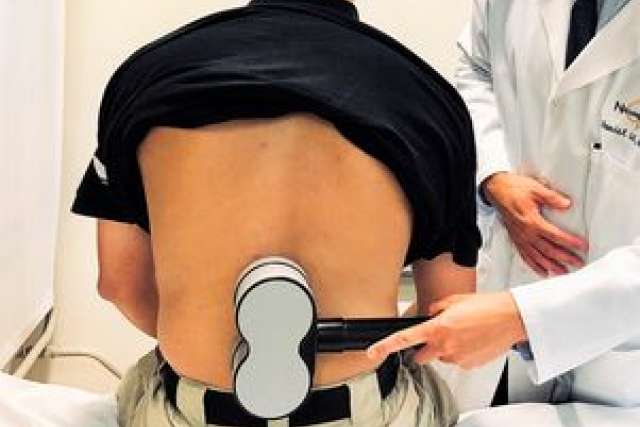 More than 80 percent of the 250,000 Americans living with a spinal cord injury lose the ability to urinate voluntarily after their injury. According to a 2012 study, the desire to regain bladder control outranks even their wish to walk again.

In a study of five men whose injuries occurred five to 13 years ago, UCLA neuroscientists stimulated the lower spinal cord through the skin with a magnetic device placed at the lumbar spine. The research is the first to show that the technique enables people with spinal cord injuries to recover significant bladder control for up to four weeks between treatments. The findings are published today in Scientific Reports.

The treatment improved the men's quality of life by an average of 60 percent (according to a questionnaire they completed before and after the study). And if the technique is replicable on other people, it could help reduce the social stigma and health risks linked to frequent catheter use.

"We were excited to see a positive effect in all five patients after only four sessions of mild magnetic stimulation," said Dr. Daniel Lu, the study's principal investigator and an associate professor of neurosurgery at the David Geffen School of Medicine at UCLA. "The benefit persisted from two to four weeks, suggesting that the spinal cord's neural circuitry retains a 'memory' of the treatment."

People with spinal cord injuries must slide a narrow tube called a catheter into the bladder several times a day to drain urine. Patients whose injuries prevent use of their hands must depend on a caretaker to insert the catheter.

But long-term reliance on a catheter can be dangerous, because the procedure can introduce bacteria that lead to urinary tract infections and permanent scarring. Bladder problems after spinal cord injuries can also lead to kidney failure and death. Lu hopes his laboratory’s research will ultimately reduce those risks by eliminating the need for catheters.

Lu and his colleagues applied magnetic stimulation to the spinal cord to access the cellular machinery controlling urination. Doctors previously have used the same approach with the brain to improve nerve cell function for conditions ranging from depression to migraine.

"Most spinal cord injuries are not anatomically complete; the spinal cord retains a weak, residual connection with the brain," Lu said. "We are restoring bladder function by amplifying these faint signals and enhancing the neural circuits' ability to respond to them."

Each participant underwent 15 minutes of weekly stimulation for four months. At first, the scientists saw no results. But after four sessions, the men began to experience measurable improvement.

"All five of the men regained the ability to urinate on their own during stimulation," Lu said. "One patient — 13 years after his injury — was able to completely stop using a catheter and empty his bladder several times a day, up to four weeks after his last treatment."

The ability to urinate at will improved in each patient. Four of the men still had to use a catheter at least once each day — but that was still a significant drop from their average of more than six times a day before the treatment.

The patients' average bladder capacity increased from 244 millimeters to 404 millimeters, and the volume of urine they produced voluntarily rose from 0 to 1120 cubic centimeters per day.

The experiment built upon Lu's earlier research, in which he surgically implanted electrical stimulation devices in the spine to improve hand control in two people with cervical spinal cord injuries. While the concept for the new study is similar, Lu's team used magnetic stimulation because it's noninvasive, painless and less costly than an electrical implant.

Lu and his colleagues plan to evaluate the approach with a larger number of men and women in a second study to gain a deeper understanding of how magnetic stimulation alters neural activity in the spinal cord. The team will also explore whether different stimulation patterns improve responses in patients who didn't benefit to the same degree as others in the study.

The magnetic stimulation device is FDA-approved for use in humans; however, its application for bladder rehabilitation is experimental.

The study was funded by the U.S. Department of Defense and the H&H Evergreen Foundation. Its coauthors are Dr. Tianyi Niu, Dr. J.C. Leiter, Dr. Carol Bennett and Tina Keller, all of UCLA.