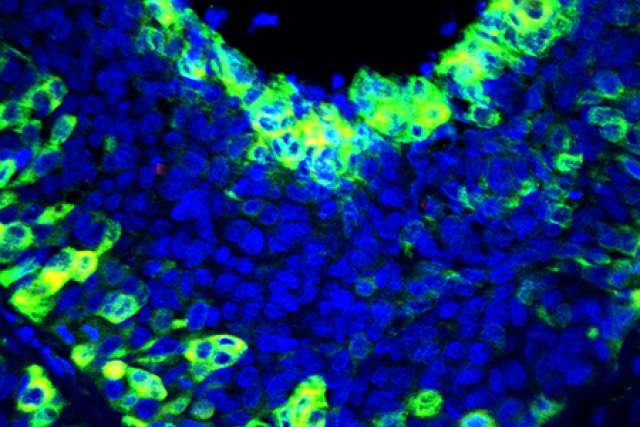 A microscope image shows a metastasized lymph node in a person with non-small cell lung cancer.

While researchers have a basic understanding of how primary cancer cells grow, less is known about metastasis, the deadly process by which cancers spread. A team led by Dr. Paul Krebsbach, dean of UCLA's School of Dentistry and professor of periodontics, has found that mEAK-7, a gene they discovered last year, may play a significant role in cancer metastasis, at least in lung cancers.

"By focusing on non-small cell lung cancer, we found that mEAK-7, which is important for cell proliferation and migration, was highly expressed in metastatic non-small cell lung cancer," said Dr. Joe Nguyen, first author and postdoctoral scholar at the National Cancer Institute. "We also discovered that mEAK-7 was expressed in primary cancer cells but not expressed in non-cancerous cells, which shows that the protein could be a key culprit in cancer metastasis."

The research was published in the journal iScience.

The researchers also found that mEAK-7, when combined with a large molecule called DNA-PKcs (which helps regulate DNA repair and controls or enhances cancer growth), created an alternative mTOR signaling pathway used by cancer cells for their growth and proliferation. In normal cells, two well-studied pathways are controlled by a gene called mTOR, which regulates normal cell growth, proliferation and survival.

"This third complex or pathway is very important for cancer stem cells, which begin the process of colony formation and cell proliferation, and lead to metastasis that is the leading cause of death in most cancers," Krebsbach said. "We determined that there are high mEAK-7 protein levels in the tumors and lymph nodes of metastatic cancer patients. Development of mEAK-7 inhibitors may benefit patients with metastatic cancers that demonstrate aberrant mTOR signaling associated with high levels of mEAK-7."

The researchers, who also looked at these signaling molecules in cancer stem cells, determined that the novel, "third" mTOR complex in cancer cells was made up of mTOR, mEAK-7 and DNA-PKcs.

"Understanding the molecular interactions of metastatic cancer is crucial to determining treatments for cancer at these later stages," said Jin Koo Kim, co-author and a UCLA Dentistry project scientist. "Currently, treatments for solid tumors include surgery and radiation therapies. However, many patients relapse, as the target tumors develop resistance to radiation and other treatments. This study found that this resistance is correlated to higher mEAK-7 expression in cancer cells."

Additional study authors are Fatima Haidar, Alexandra Fox, Connor Ray and Daniela Mendonça, all from the University of Michigan.

The study was supported in part by the National Institute of Dental and Craniofacial Research, and the Stuart and Barbara Padnos Research Award from the Rogel Cancer Center at the University of Michigan. The authors have no competing interests to declare.