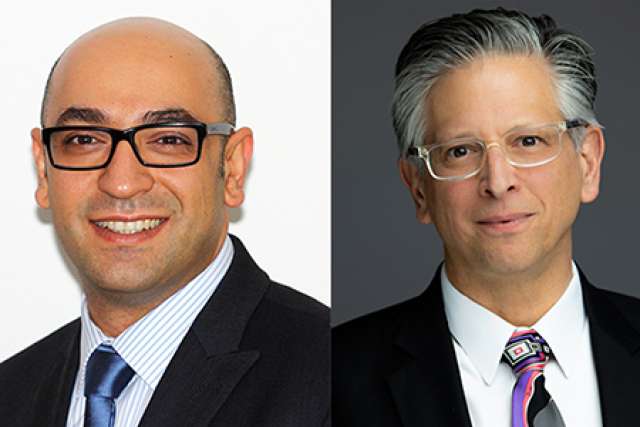 Periodontitis affects nearly half of Americans ages 30 and older, and in its advanced stages, it could lead to early tooth loss or worse. Recent studies have shown that periodontitis could also increase risk of heart disease and Alzheimer's disease.

A team of UCLA researchers has developed methods that may lead to more effective and reliable therapy for periodontal disease — ones that promote gum tissue and bone regeneration with biological and mechanical features that can be adjusted based on treatment needs. The study is published online in ACS Nano.

Periodontitis is a chronic, destructive disease that inflames the gums surrounding the tooth and eventually degrades the structure holding the tooth in place, forming infected pockets leading to bone and tooth loss. Current treatments include infection-fighting methods; application of molecules that promote tissue growth, also known as growth factors; and guided tissue regeneration, which is considered the optimal standard of care for the treatment of periodontitis.

Guided tissue regeneration, in the case of periodontitis, involves the use of a membrane or thin film that is surgically placed between the inflamed gum and the tooth. Membranes, which come in non-biodegradable and biodegradable forms, are meant to act not only as barriers between the infection and the gums, but also as a delivery system for drugs, antibiotics and growth factors to the gum tissue.

Unfortunately, results from guided tissue regeneration are inconsistent. Current membranes lack the ability to regenerate gum tissue directly and aren't able to maintain their structure and stability when placed in the mouth. The membrane also can't support prolonged drug delivery, which is necessary to help heal infected gum tissue. For non-biodegradable membranes, multiple surgeries are needed to remove the membrane after any drugs have been released — compromising the healing process.

"Given the current disadvantages with guided tissue regeneration, we saw the need to develop a new class of membranes, which have tissue and bone regeneration properties along with a flexible coating that can adhere to a range of biological surfaces," said Dr. Alireza Moshaverinia, co-lead author of the study and assistant professor of prosthodontics at the UCLA School of Dentistry. "We've also figured out a way to prolong the drug delivery timeline, which is key for effective wound healing."

The team started with an FDA-approved polymer — a large-scale synthetic molecule commonly used in biomedical applications. Because the polymer's surface isn't suitable for cell adhesion in periodontal treatment, the researchers introduced a polydopamine coating — a polymer that has excellent adhesive properties and can attach to surfaces in wet conditions. The other benefit of using such a coating is that it speeds up bone regeneration by promoting mineralization of hydroxyapatite, which is the mineral that makes up tooth enamel and bone.

After identifying an optimal combination for their new membrane, the researchers used electrospinning to bond the polymer with the polydopamine coating. Electrospinning is a production method that simultaneously spins two substances at a rapid speed with positive and negative charges, and fuses them together to create one substance. To improve their new membrane's surface and structural characteristics, the researchers used metal mesh templates in conjunction with the electrospinning to create different patterns, or micro-patterning, similar to the surface of gauze or a waffle.

"By creating a micro pattern on the surface of the membrane, we are now able to localize cell adhesion and to manipulate the membrane's structure," said co-lead author Paul Weiss, UC Presidential Chair and distinguished professor of chemistry and biochemistry, bioengineering, and materials science and engineering at UCLA. "We were able to mimic the complex structure of periodontal tissue and, when placed, our membrane complements the correct biological function on each side."

To test the safety and efficiency of their new membrane, the researchers injected rat models with gingival-derived human stem cells and human periodontal ligament stem cells. After eight weeks of evaluating the degradation of the membranes and the tissue's response, they observed that the patterned, polydopamine-coated polymer membrane had higher levels of bone gain when compared to models with no membrane or a membrane with no coating.

In order to suit a wide range of medical and dental applications, the researchers also figured out a way to adjust the speed at which their membranes degraded when inserted in their models. They did this by adding and subtracting different oxidative agents or using lighter polymer bases before going through the electrospinning process. The ability to turn the degradation rates up or down helped the researchers control the timing of the delivery of drugs to the desired areas.

"We've determined that our membranes were able to slow down periodontal infection, promote bone and tissue regeneration, and stay in place long enough to prolong the delivery of useful drugs," Moshaverinia said. "We see this application expanding beyond periodontitis treatment to other areas needing expedited wound healing and prolonged drug delivery therapeutics."

The researchers' next steps are to evaluate whether their membranes can deliver cells with growth factors in the presence or absence of stem cells.

The study's first author is Mohammad Mahdi Hasani-Sadrabadi, a UCLA project scientist in chemistry; and biochemistry and bioengineering. The other authors are Patricia Sarrion, Nako Nakatsuka, Thomas Young, Nika Taghdiri, Sahar Ansari, Tara Aghaloo, Song Li and Ali Khademhosseini, all of UCLA. Weiss is also a member of the UCLA California NanoSystems Institute, the Jonsson Comprehensive Cancer Center and the Eli and Edythe Broad Center of Regenerative Medicine and Stem Cell Research at UCLA.

The research was supported by a grant from the National Institute of Dental and Craniofacial Research.