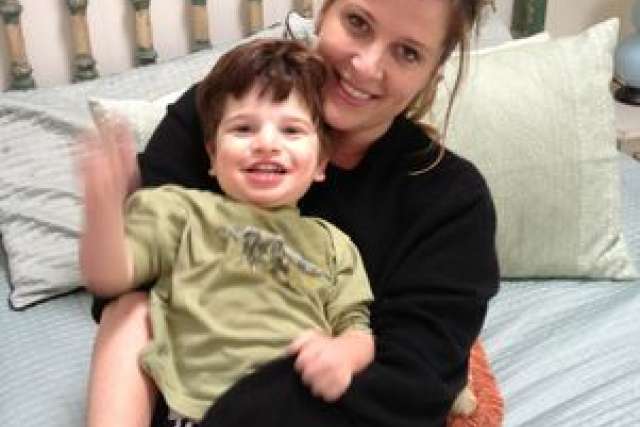 Audrey Lapidus adored her baby’s sunny smile and irresistible dimples. But when Calvin was 10 months old, suffering from chronic digestive problems and unable to roll over or crawl, she was worried.

Four neurologists were unable to determine the cause, and a battery of tests proved inconclusive. Desperate for answers, Audrey and her husband, Eric, brought Calvin to UCLA, where they agreed to have him become the first person at UCLA’s David Geffen School of Medicine to undergo a powerful new test called exome sequencing.

The test focuses on exomes, the protein-coding portions of genes that account for only 1 percent of DNA but nearly 85 percent of the glitches known to cause human diseases.

Using DNA collected from Calvin’s and his parents’ blood, a sophisticated sequencing machine rapidly scanned the boy’s genome, compared it to his parents’ and flagged a variant on his 18th chromosome. Calvin was diagnosed with Pitt-Hopkins Syndrome, a rare genetic disorder that affects only 250 children worldwide. At last, Audrey and Eric had a concrete diagnosis and clear direction for seeking the best treatment for their son.

Now a landmark UCLA study makes a persuasive argument for the routine clinical use of exome sequencing as a tool for diagnosing children with rare genetic disorders. Published online by the Journal of the American Medical Association, the findings show that exome sequencing produced a definitive diagnosis in 40 percent of UCLA’s most complex cases — a quantum leap from the field’s 5 percent success rate two decades ago.

“Our study is the first to show that sequencing a child’s genome together with his or her parents’ dramatically improves geneticists’ ability to reach a firm diagnosis in rare disorders,” said corresponding author Dr. Stan Nelson, vice chair of human genetics and a professor of pathology and laboratory medicine at David Geffen School of Medicine at UCLA. “We discovered a genetic cause for the conditions affecting 40 percent of the hundreds of young children who come to UCLA for exome sequencing due to developmental delays or intellectual disabilities.”

When it opened in 2011, the UCLA Clinical Genomics Center was one of just three facilities in the world putting DNA sequencing to clinical use. (The others are at the medical centers at Baylor University and Harvard University.)

Unlike earlier diagnostic tools that study one gene at a time, exome sequencing rapidly sifts through all of the 37 million base pairs in a person’s 20,000 genes to tease out the single DNA change that causes the genetic disorder.

For the two-year study, Nelson worked with first author Hane Lee, a UCLA assistant adjunct professor of pathology, to sequence and analyze the exomes of 814 children whose symptoms had baffled previous clinicians despite exhaustive genetic, biochemical and imaging tests. The researchers sequenced the genomes of each child and their parents and then funneled the raw data through high-powered computers and specialized software to identify variants from the standard human genome.

Next, the team filtered the data based on patients’ family histories and other relevant aspects of their conditions. The researchers pored through medical literature to find all genes and mutations linked to each patient’s symptoms. Finally, UCLA’s Genomics Data Board, a multidisciplinary team of experts, reviewed the findings to reach a diagnosis.

The entire process typically takes less than eight weeks, although tests have been completed within 10 days in medically urgent situations. With preauthorization, many insurance providers cover the cost to sequence a child and both parents. If not, the out-of-pocket fee is $6,650.

Audrey Lapidus said that having a diagnosis for Calvin “meant the world.” A former journalist, she investigated his disorder extensively, launched the Pitt-Hopkins Research Foundation and helped raise $1 million to fund research on the syndrome. She is passionate about promoting the availability of exome sequencing to parents and physicians, who often don’t inform families that the test is available.

Pitt-Hopkins Syndrome can cause delayed intellectual and motor skill development, breathing problems and seizures. Now an adorable 3-year-old, Calvin still cannot walk and may never speak. Still, Audrey Lapidus said she and Eric would rather know what to expect for their son than have to continue living in diagnostic limbo.

“All families deserve a clear diagnosis of their child’s condition,” said study co-author Dr. Wayne Grody, director of the UCLA Clinical Genomics Center and a professor of pathology, human genetics and pediatrics at the Geffen School of Medicine and Mattel Children’s Hospital UCLA. “Exome sequencing plays an important role in identifying the precise cause of a child’s illness. This is immediately useful to families and physicians in understanding how the disease occurred, preventing unnecessary testing, and developing the best strategies to treat it.”

The Clinical Genomics Center provides extensive counseling to guide families through the tests and prepare them for the results. The team also coordinates multidisciplinary care with UCLA specialists to address the medical complications associated with each child’s illness.

“Many parents of a child with a genetic disorder postpone getting pregnant for fear of passing the same disease on to future children,” said Naghmeh Dorrani, a UCLA genetic counselor and co-author of the study. “Exome sequencing can ease this concern by helping us to identify the risk of recurrence and offer parents appropriate prenatal testing options.”

The study was supported by grants from the National Center for Advancing Translational Science, the National Institute of Arthritis and Musculoskeletal and Skin Diseases, the California Institute of Regenerative Medicine and K12 Child Health Research Career Development Award, and the Hyundai Hope on Wheels Scholar Award.