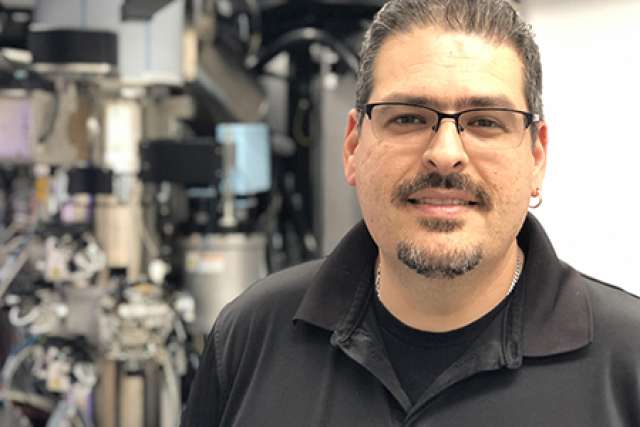 In 2013, Tamir Gonen, a professor of biological chemistry and physiology at the UCLA David Geffen School of Medicine, created microcrystal electron diffraction.

When researchers at the University of Illinois Urbana-Champaign discovered a small molecule that's created by cells in a completely new way, one of their first questions was what the molecule looked like. But none of the standard methods of determining molecular structure worked for them. So they teamed up with UCLA scientists who had developed a new approach to visualizing structure — called microcrystal electron diffraction, or MicroED. Using this approach helped the teams to confirm how the newly discovered molecular assembly pathway works.

Some small molecules produced by bacteria have properties that make them useful in food, agriculture and medicine. Many of these small molecules are short proteins, or peptides, with various chemical modifications. While investigating one such peptide, Tg1A, researchers found that it didn't form by way of the cell's normal assembly process. After being formed, Tg1A was broken, reassembled, extended and modified in a completely new way. To fully understand the new pathway, the team needed to visualize the three-dimensional structure of the peptide at different points in its formation.

The standard way to determine a protein's structure, by X-ray crystallography, relies on scientists' ability to isolate high concentrations of the protein, dissolve it in a liquid, and slowly grow it into large crystals. But in 2013, Tamir Gonen, now a professor of biological chemistry and physiology at the UCLA David Geffen School of Medicine, created microcrystal electron diffraction, which instead uses minute amounts of the powder form of a protein, containing crystals billions of times smaller than those required for X-ray crystallography.

In the new work, Gonen and colleagues applied microcrystal electron diffraction to the Tg1A peptide, which was easily formulated into the powder required for the approach. Initially, the peptide degraded too quickly, destroyed by the electrons that bombard the tiny crystals to determine their structure. So the group turned to a faster camera and a weaker beam of electrons and — in just one afternoon — were able to see the atomic structure of Tg1A.

The structure of Tg1A determined at UCLA helped the Illinois researchers describe how the peptide was being assembled in cells, a pathway that may help scientists discover new ways of producing small molecules with applications in industry and medicine. Many of these newly discovered small molecules may become tomorrow's antibiotics, so it is important to know their structure. The new paper also illustrates the utility of microcrystal electron diffraction in quickly determining the structures of novel small molecules, a typically long, cumbersome process that has slowed the development of new drugs and other compounds.

The authors of the study are Gonen, Steve Halaby, a postdoctoral research fellow at UCLA, and Chi Ting, Michael Funk, Zhengan Zhang and Wilfred van der Donk of the University of Illinois at Urbana-Champaign.

The study was published in the journal Science.

The study and researchers were funded by the National Institutes of Health and the Howard Hughes Medical Institute.