Not all astrocytes in the brain are the same, study finds 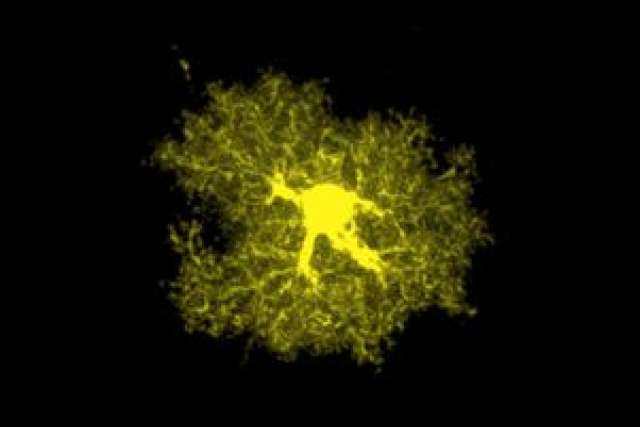 From afar, the billions of stars in our galaxy look indistinguishable, just as the billions of star-shaped astrocytes in our brains appear the same as each other. But UCLA researchers have now revealed that astrocytes, a type of brain cell that supports and protects neurons, aren’t all the same. While stars might be categorized by their size, age and heat, the supportive brain cells vary when it comes to shape, molecular machinery and functioning.

The findings, published today in the journal Neuron, should make it easier for researchers to study how astrocytes relate to disease, or to develop drugs that aim to target small subsets of astrocytes, said Baljit Khakh, a UCLA professor of physiology and neurobiology and the study’s senior author.

Unlike neurons, astrocytes in the brain don’t directly process information, store memories or control the body’s movements. Instead, astrocytes — which have been described as glue-like — are known to compose the blood-brain barrier, give the brain structure, carry nutrients to neurons, and regulate the concentration of certain molecules between neurons. They also play a key role in helping the brain repair itself after traumatic injuries, strokes or infections. And studies have suggested links between impaired astrocytes and diseases of the nervous system, including Huntington’s, ALS, multiple sclerosis and Alzheimer’s.

“Essentially all brain diseases likely contain an astrocytic component,” Khakh said. “But it hasn’t been explored much because there just haven’t been good enough methods to study the astrocytes.”

To test the long-held theory that astrocytes throughout the brain have the same properties and functions, Khakh and his colleagues looked at astrocytes in two areas of mouse brains. The two areas — the dorsolateral striatum and the hippocampus CA1 stratum radiatum — are known to be quite different in their functions and the types of neurons they contain. The dorsolateral striatum is involved in controlling movement, while the hippocampus helps establish long-term memories. The scientists performed dozens of in-depth tests on the astrocytes from each area of the brain.

Khakh’s team found that the astrocytes in the striatum and hippocampus had differences that affected how they functioned and how they interacted with neurons. The cells varied between the two brain circuits when it came to how they interacted with neurons and conducted chemicals across their membranes. Moreover, the astrocytes in the striatum had different genes turned on than astrocytes from the hippocampus.

In the past, most researchers dismissed the idea that drugs could selectively target small sets of astrocytes to try to treat brain diseases, because of the assumption that a drug targeting astrocytes would impact the whole brain. “But we’re seeing differences between astrocytes in different areas, and I suspect there are differences far greater than what we’ve seen so far,” Khakh said. The new observation means that it may be possible for drugs to work on just a small subset of astrocytes, selected by their molecular characteristics.

“Deepening our understanding of astrocyte biology in the healthy brain enables us to examine what happens to these cells in neuropsychiatric disorders and potentially intervene in astrocytes in a specific brain region for therapeutic benefit,” said Hua Chai, a UCLA graduate student and co-first author of the new paper.

“Our work suggests that differences in astrocyte functions between circuits may be one of the main reasons why in some neurological diseases, there are brain regions that are more susceptible than others,” added Blanca Diaz-Castro, a postdoctoral research fellow in the Khakh lab and co-first author of the paper.

The team has further questions about the astrocytes in the striatum and hippocampus and plans to start analyzing astrocytes from other areas of the brain.

This work and the researchers involved were supported mainly by the National Institutes of Health and the American Heart Association.