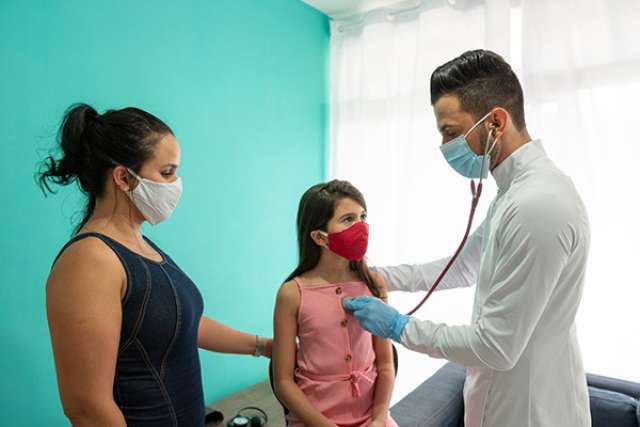 UCLA researchers determined that the number of Latino children of immigrant parents who do not have a usual source of medical care could increase from the current level of just over 64,000 to more than 180,000.
April 8, 2021
Estimated read time: 3 minutes

The Trump administration's expansion of the "public charge" rule — a move that sought to disqualify immigrants who used social programs like Medicaid from obtaining legal residency in the U.S. — led to widespread disenrollment from these programs and left scores of children in California without access to health care in the midst of the COVID-19 pandemic.

What's more, say the authors of a new report from the UCLA Latino Policy and Politics Initiative, the fear and confusion that the now-rescinded Trump-era policy sowed in the state will likely have a chilling long-term effect, potentially discouraging the parents of over 100,000 more children from seeking proper pediatric care.

The researchers analyzed rates of disenrollment from non-cash public assistance programs that occurred in the wake of recent and previous changes to the public charge rule. They then estimated potential increases to the number of non-covered young people in California.

They determined that the number of Latino children of immigrant parents who do not have a usual source of medical care could increase from the current level of just over 64,000 to more than 180,000 as parents avoid enrolling or disenroll their children from these programs out of fear of jeopardizing their immigration status. Additionally, the researchers say, the number who have not seen a doctor within the previous 12 months could eventually jump from approximately 99,000 to almost 240,000.

The public health consequences are likely to extend even to U.S.–born children, who are already citizens but whose immigrant parents may fear that enrolling them in public assistance programs might limit their own path to a "green card," or lawful permanent residency, the authors say.

The report recommends a complete elimination of the public charge rule, which originally sought to discourage immigrants from relying on cash assistance programs but was expanded by the Trump administration in 2020 to include non-cash programs like Medicaid, WIC, food stamps, child care subsidies and housing benefits. The Biden administration formally rescinded the Trump expansion in March 2021, but not before the COVID-19 pandemic had taken a heavy and disproportionate toll on the health of immigrant communities throughout California and the U.S. and pushed many immigrants out of work.

"The pandemic has revealed that our collective public health is dependent on robust access to quality care, especially for our nation's most vulnerable and diverse immigrant communities who are on the front lines of COVID-19," said Sonja Diaz, founding director of the Latino Policy and Politics Initiative. "Yet the motivation behind the Trump administration's public charge rule belies the fact that the nation's youthful immigrant communities make significant economic and social contributions to this country in times of crisis and times of opportunity."

The researchers noted that complex and often confusing changes to immigration policies, like the public charge rule, have long prevented eligible immigrants from seeking public assistance, and the report indicates that immigrant communities in Los Angeles County have been more acutely impacted by this uncertainty than those in any other region in the state.

"This research shows that policies like the public charge rule can create real and perceived barriers for many of our most vulnerable neighbors," said Rachel Nuzum, vice president for federal and state policy at the Commonwealth Fund, which funded the research. "It also illustrates the importance not only of reversing harmful policies but also effectively communicating and engaging affected communities through trusted partners and clear messages."

"The COVID-19 pandemic," she said, "has shown us with frightening clarity that in our country, and within each of our communities, our ability to live safe and healthy lives depends on the extent to which all have access to affordable and equitable health care, regardless of race, ethnicity, income, zip code or immigration status."