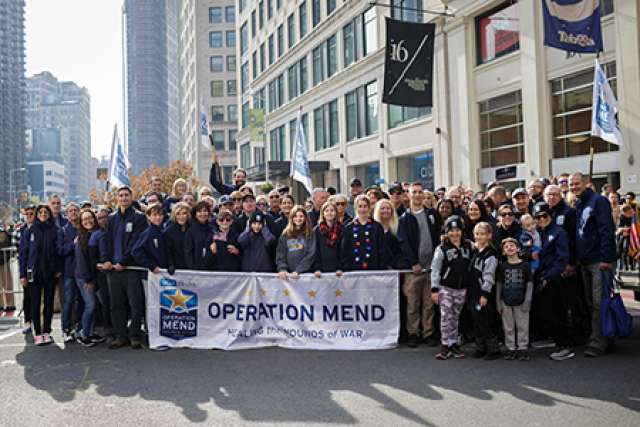 A huge contingent from UCLA Operation Mend marched in the oldest and largest parade in the United States that honors those who served.
November 13, 2019
Estimated read time: 2 minutes

As the 11 veterans who have been treated through the UCLA Health Operation Mend program began their 1.2-mile trek for the 100th New York City's Veteran's Day parade, they took a moment to reflect. For many of them, the day was a powerful mark on their collective journey toward healing their wounds of war.

Almost 100 people joined the Operation Mend contingency, including family members, supporters, staff, friends and other veterans as they walked by thousands of people lining Fifth Avenue cheering the veterans for their service, sacrifices and resilience. The 34th Commandant of the Marine Corps, retired Gen. James Amos and his wife Bonnie Amos, who are members of Operation Mend's founding board of advisors, also joined the group of marchers.

Founded in 2007, UCLA Health Operation Mend brings hope to those who have struggled with physical wounds as well as an intensive treatment program for PTSD and mild traumatic brain injury to veterans injured during combat operations or while training for service. Operation Mend is the only program in the nation that treats caregivers alongside their veterans as full participants in its intensive treatment program. It is a collaboration among UCLA Health in Los Angeles, the United States military and the Department of Veterans Affairs to help treat the wounds of war.

"Before Operation Mend, I would hide in a hoodie at my mother's house," said Army Spc. Joseph Paulk, who suffered burns to his body and face, damage to his vocal cords and had to have all of his fingers amputated after the vehicle in which he was riding was hit by an exploding mine. "I stand confidently because of the services I received. I am proud to walk with my veteran brothers and sisters in the parade."

In addition to walking the parade, veterans participated in other events, including a visit to the 9/11 Memorial & Museum and Operation Mend's first patient, Marine Cpl. Aaron Mankin, attended the closing bell ceremony at the NASDAQ stock market in a special ceremony that also included U.S. Secretary of Defense Mark Esper.

"It's all about the people," Mankin said. "We come back each year, a little different, a little more healed. These types of events do my heart good."

Operation Mend has grown in size and scope with the help of the Wounded Warrior Project, which committed $20.1 million last year to allow more post 9/11 veterans suffering from post-traumatic stress and mild traumatic brain injury to receive intensive treatment for their invisible wounds.