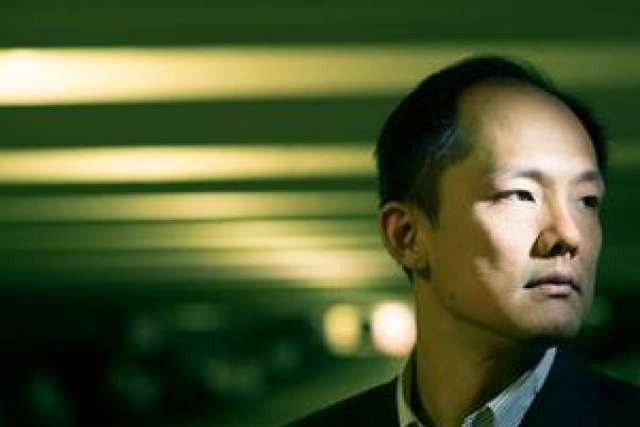 Associate professor Chi On Chui developed a device that could reduce emergency room time for heart attack patients by two to three hours. With a single drop of blood, the sensor can help screen out patients who do not require further medical care.

A recent cartoon in the New Yorker magazine depicts a human resource manager behind a desk, holding up a form and emphatically telling the person in front of him, “You can’t list your iPhone as your primary physician!”

The drawing makes us laugh, mostly because we see the grains of truth planted within. As mobile devices propel the health care industry into a new, wireless universe, patients are reaping benefits far beyond vacation selfies. UCLA physicians, software developers and computer science engineers are in the lead on this transformation, which experts say will forever alter health, fitness and chronic disease management.

“We all know how popular wearable fitness devices like Fitbit and Jawbone have become,” says Dr. Andrew Trister, a radiation oncologist and senior physician at Sage Bionetworks, a Seattle-based nonprofit that promotes open science and participant involvement in the research process. “But they can’t offer the sophisticated, interactive data that smartphones can aggregate to both researchers and physicians.”

Using data gathered both from smartphones and fitness trackers, the app for Sage’s interactive research study, “Share the Journey,” is a prime example. It was developed by Sage with scientific advisers from Penn Medicine, the Dana-Farber Cancer Institute and UCLA’s Jonsson Comprehensive Cancer Center — most notably Dr. Patricia Ganz, director of cancer prevention and control research, whose efforts toward creating personalized care for cancer survivors are known worldwide.

Since March, the app has tracked the experiences of thousands of women between the ages of 18 and 80, some of whom are breast cancer survivors. Women supply personalized data on five common side effects of breast cancer treatment: fatigue, cognitive difficulties, sleep disturbances, mood changes and a reduction in exercise performance.

Michael Tighe
Jo-Ann Eastwood, associate professor of nursing, led a study that used smartphones to track the eating habits and daily activity of women at risk for heart disease.

Across the campus, similar breakthroughs are occurring regularly. Last summer, associate professor of electrical engineering and  bioengineering Chi On Chui won a $1.65 million award from the Heart, Lung, and Blood Institute of the National Institutes of Health to develop a biosensor device that brings laboratory-quality, bio-molecular assessments to clinics, ambulances, homes and other point-of-care settings.

Chui’s Semiconductor Electronic Label-Free Assay (SELFA) device could reduce emergency room time for heart attack patients by two to three hours. Not unlike a palm-sized glucose sensor used by diabetics, SELFA employs a drop of blood — taken at home or wherever symptoms occur — to help screen out patients who do not require further medical care. The cost-savings potential alone is enormous, Chui says. The device was developed with UCLA Engineering’s Institute for Technology Advancement, a startup incubator that helps secure intellectual property licenses for UCLA research.

“Eighty-five percent of patients who present with symptoms of acute coronary syndrome in emergency rooms across the U.S. and Europe — some 12.75 million per year — have actually not had heart attacks after a standard test comes back hours later from the lab,” Chui says.

Chui says the reason his device is being fast-tracked toward commercial use is the synergy among departments at UCLA. “We have the best hospital on the West Coast,” he says. “I can literally walk across the hallway and have physicians validate a [new mobile health platform] I created in my lab. That relationship between engineering and medical, along with Southern California’s rapidly growing biotechnology sector, is unparalleled anywhere else in the country.”

A first-ever biomedical app Ozcan developed for Google Glass enables users to photograph results of remotely taken advanced diagnostic tests for diseases like HIV, prostate cancer and malaria. The engineer and his team previously created digital readers integrated into smartphones that detect potential disease biomarkers and convert them into differentiated optical color bands. This rapid diagnostic testing technology has already been licensed by the UCLA spinoff Holomic, is in use in 10 countries and is up for FDA approval.

Making care affordable and accessible is a prime goal for those working in mobile health. Majid Sarrafzadeh, distinguished professor of computer science and co-director of UCLA’s Wireless Health Institute, wants to create apps and devices that allow patients to receive continuous support without the constant attention of caregivers and medical professionals.

“There are [commercially available] wearable devices that measure our weight, blood pressure and how much we walk, but nothing that measures how much we eat, which has a great impact on our health,” Sarrafzadeh says. His team has created WearSens, a wireless necklace device that captures vibrations from the act of swallowing, transmits those signals to a smartphone and then translates the data into a visual spectrogram.

The device’s Android app provides users with daily, weekly and monthly views of their eating history, personalized feedback based on eating habit analysis, and manual entry of fitness goals and weight history.

Some UCLA wireless initiatives are already changing lives. About three years ago, Maxim Batalin, associate director of UCLA Engineering’s Institute for Technology Advancement, created an app for off-the-shelf heart-monitoring devices that could remotely chart the activity and stress levels of emergency responders, who carry a high risk of heart attack due to their work.

After the platform had been deployed around the country, Batalin wanted to “leverage the experience we gained with this remote monitoring system for other applications.” It found another life with associate professor of nursing Sally Maliski. Her ongoing research study uses smartphones and heart-rate monitors to improve outcomes for men on long-term therapy for prostate cancer.

“The whole key to these remote health systems,” Batalin explains, “is that, as in this School of Nursing study, a few experts at UCLA are able to monitor and give feedback to many people in real time, so that each individual doesn’t have to come into an office or clinic on a regular basis.” And the app is very simple to use. The men also receive messages that encourage them to work harder or slow down if they are at risk.

Monica Mallet, 40, of Los Angeles says her high level of stress had increased her risk for heart disease before she entered a 2014 mobile health study in the nursing school that used smartphones to track her daily activity and eating habits. “I’m a single mother of an 8-year-old, I’m finishing my doctoral research, and I’m working full-time in K-12 education,” she says. “I also love salty foods and didn’t work out, even though I wanted to lead a healthy lifestyle.”

Nurse practitioner and associate professor Jo-Ann Eastwood led the study, which was funded by the American Heart Association. She gave Android-based smartphones to 40 African-American women between the ages of 25 and 45 who had at least two risk factors for early-onset heart disease. The phones, which could only text, were loaded with an app Eastwood had configured that posed questions such as “Did you eat six servings of fruit today?” and “Did you get at least 30 minutes of activity today?”

Mallet says that the study fit her busy life. “It was based around a smartphone, something I have with me all the time,” she adds. “I learned how to recognize and manage stress. And having that sense of accomplishment when you achieve [your individualized goal] of 10,000 steps every day was inspirational.”

This story from UCLA Magazine has been edited. Read the complete story here.