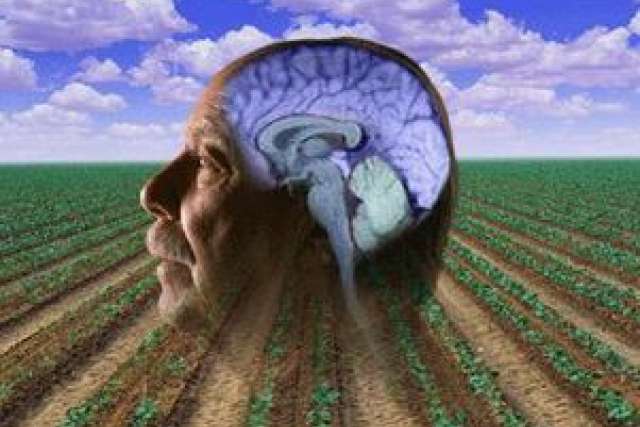 Scientists know that in animal models and cell cultures, such pesticides trigger a neurodegenerative process that leads to Parkinson's disease. Now, researchers at UCLA provide the first evidence for a similar process in humans.

Reporting in the April 15 issue of the American Journal of Epidemiology, Beate Ritz, professor of epidemiology at the UCLA School of Public Health, and Sadie Costello, a former doctoral student at UCLA who is now at the University of California, Berkeley, found that Central Valley residents who lived within 500 meters of fields sprayed between 1974 and 1999 had a 75-percent increased risk for Parkinson's.

In addition, people who were diagnosed with Parkinson's at age 60 or younger were found to have been at much higher risk because they had been exposed to maneb, paraquat or both in combination between 1974 and 1989, years when they would have been children, teens or young adults.

The researchers enrolled 368 longtime residents diagnosed with Parkinson's and 341 others as a control group.

Parkinson's disease is a degenerative disorder of the central nervous system that often impairs motor skills, speech and other functions. It has been reported to occur at high rates among farmers and in rural populations, contributing to the hypothesis that agricultural pesticides may be partially responsible.

Until now, however, data on human exposure has been unavailable, largely because it has been too hard to measure an individual's environmental exposure to any specific pesticide.

"Because pesticides applied from the air or ground may drift from their intended treatment sites — with measurable concentrations subsequently detected in the air, in plants and in animals up to several hundred meters from application sites — accurate methods of estimating environmental exposures in rural communities have long been sorely needed," said Ritz, the study's senior author and vice chair of the School of Public Health's epidemiology department.

So Ritz, Costello and colleague Myles Cockburn from the University of Southern California, developed a geographic information system–based tool that estimated human exposure to pesticides applied to agricultural crops. This GIS tool combined land-use maps and pesticide-use reporting data from the state of California. Each pesticide-use record includes the name of the pesticide's active ingredient, the amount applied, the crop, the acreage of the field, the application method and the date of application.

Research subjects were recruited between 1998 to 2007; telephone interviews were conducted to obtain their demographic and exposure information. Detailed residential history forms were mailed to subjects in advance of their interviews and were reviewed in person or over the phone. The researchers recorded and added lifetime residential histories and estimated ambient exposures into the system for all historical addresses at which participants had resided between 1974 and 1999, the period covered by the pesticide-use data.

"The results confirmed two previous observations from animal studies," Ritz said. "One, that exposure to multiple chemicals may increase the effect of each chemical. That's important, since humans are often exposed to more than one pesticide in the environment. And second, that the timing of exposure is also important."

Ritz noted that this is the first epidemiological study to provide strong evidence that maneb and paraquat act synergistically to become neurotoxic and strongly increase the risk of Parkinson's disease in humans.

Of particular concern, Ritz said, and consistent with other theories regarding the progression of Parkinson's pathology, is that the data "suggests that the critical window of exposure to toxicants may have occurred years before the onset of motor symptoms when a diagnosis of Parkinson's is made."

In addition to Ritz and first author Costello, study authors included Jeff Bronstein, UCLA professor of neurology, and Xinbo Zhang of USC. The authors declare no conflicts of interest.

The UCLA School of Public Health is dedicated to enhancing the public's health by conducting innovative research, training future leaders and health professionals, translating research into policy and practice, and serving local, national and international communities.