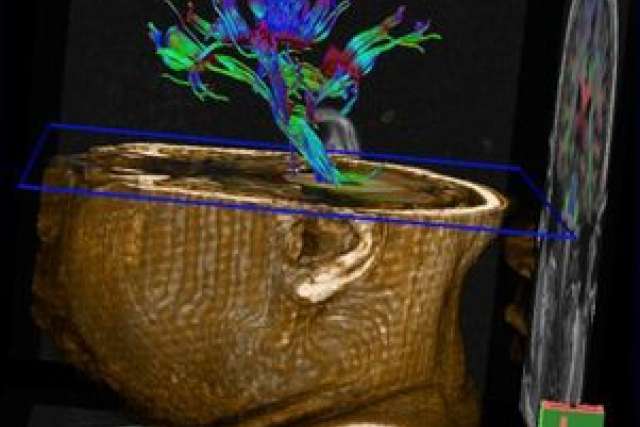 Had Griffey been 40, it could be argued, he might not have made the throw in time. That's because in middle age, we begin to lose myelin — the fatty sheath of "insulation" that coats our nerve axons and allows for fast signaling bursts in our brains.

Reporting in the online version of the journal Neurobiology of Aging, Dr. George Bartzokis, professor of psychiatry at the UCLA Semel Institute for Neuroscience and Human Behavior at UCLA, and his colleagues compared how quickly a group of males ranging in age from 23 to 80 could perform a motor task and then correlated their performances to their brains' myelin integrity. The researchers found a striking correlation between the speed of the task and the integrity of myelination over the range of ages. Put another way, after middle age, we start to lose the battle to repair the myelin in our brain, and our motor and cognitive functions begin a long, slow downhill slide.

The myelination of brain circuits follows an inverted U-shaped trajectory, peaking in middle age. Bartzokis and others have long argued that brain aging may be primarily related to the process of myelin breakdown.

"studies have shown us that as we age, myelin breakdown and repair is continually occurring over the brain's entire 'neural network,'" said Bartzokis, who is also a member of UCLA's Ahmanson–Lovelace Brain Mapping Center and the UCLA Laboratory of Neuro Imaging. "But in older age, we begin losing the repair battle. That means the average performance of the networks gradually declines with age at an accelerating rate."

The researchers proposed that cognitive, sensory and motor processing speeds are all highly related to this decline. To test their hypothesis, they used one of the simplest and best understood tests of central nervous system processing speed: how fast an individual can tap their index finger.

It's well known that the speed of a movement increases with the frequency of neuronal action potential (AP) bursts in the brain. AP is an electrical discharge that travels over the axons connecting nerves, whether it's Ken Griffey Jr.'s brain ordering his arm to throw or the brain telling a finger to tap. Fast movements require high-frequency AP bursts that depend on excellent myelin integrity over the entire axon network involved in controlling that movement.

In the study, each of the 72 participants had a magnetic resonance imaging (MRI) scan that measured the myelin integrity in the vulnerable wiring of their brain's frontal lobes. The maximum finger-tapping speed (the number of taps over a period of 10 seconds) was measured just before the MRI measure was obtained.<

The results supported what the researcher had suspected, that finger-tapping speed and myelin integrity measurements were correlated and "had lifespan trajectories that were virtually indistinguishable," according to Bartzokis. And yes, they both peaked at 39 years of age and declined with an accelerating trajectory thereafter.

Bartzokis said these observations are consistent with the hypothesis that "maximum motor speeds depend upon high frequency AP bursts that, in turn, depend on the myelin integrity of the neural networks involved in the task."

"Beginning in middle age," he said, "the process of age-related myelin breakdown slowly erodes myelin's ability to support the very highest frequency AP bursts. That may well be why, besides achy joints and arthritis, even the fittest athletes retire and all older people move slower than they did when they were younger."

"The results are pretty striking," Bartzokis said. "The nearly identical trajectory across the lifespan for both measures of myelin integrity and fine motor speed supports the notion that myelin health underlies maximum AP burst frequency."

Significantly, the research suggests that the myelin breakdown process should also reduce all other brain functions for which performance speed is dependent on higher AP frequencies, including memory; it also supports the suggestion that myelin breakdown is a biological process of aging underlying the erosion of physical skills and cognitive decline, including the onset of such age-driven disorders as Alzheimer's disease.

There is, however, some good news, according to Bartzokis.

"Since in healthy individuals brain myelin breakdown begins to occur in middle age, there is a decades-long period during which therapeutic interventions could alter the course of brain aging and possibly delay age-driven degenerative brain disorders such as Alzheimer's," he said. "Non-invasive, serial evaluations of myelin integrity could be used to monitor the effects of new and current treatments that may slow the process of myelin breakdown as early as midlife."

The study was supported by the National Institutes of Health, the RCS Alzheimer's Foundation, Sidell-Kagan Foundation; and the U.S. Department of Veterans Affairs.

The Semel Institute for Neuroscience and Human Behavior at UCLA is an interdisciplinary research and education institute devoted to the understanding of complex human behavior, including the genetic, biological, behavioral and sociocultural underpinnings of normal behavior, and the causes and consequences of neuropsychiatric disorders. In addition to conducting fundamental research, institute faculty members seek to develop effective treatments for neurological and psychiatric disorders, improve access to mental health services, and shape national health policy regarding neuropsychiatric disorders.
Media Contact:
Mark Wheeler
(310) 794-2265
[email protected]