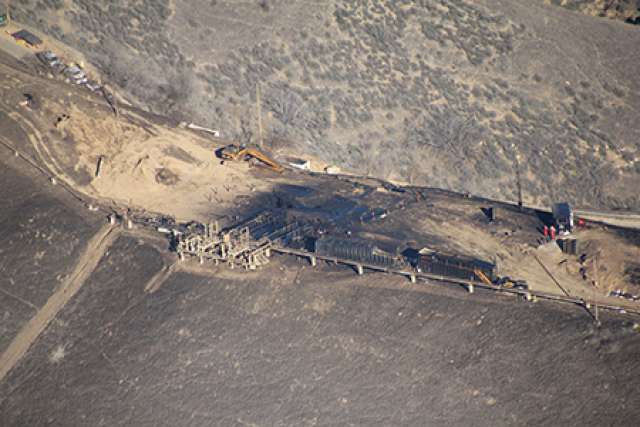 The Aliso Canyon facility after the 2015 methane blowout.

The 2015 blowout at the Aliso Canyon natural gas storage facility near Los Angeles led to the largest-known human-caused release of methane in U.S. history. Now, a study of air quality samples collected near the facility shows elevated levels of pollutants known or suspected to be associated with serious health problems.

The study, led by UCLA Fielding School of Public Health researchers, appears in the June 26 issue of the peer-reviewed journal Environment International. It raises concerns about the potential public health effects of the methane leak at the Southern California Gas Company facility, which is less than a mile from the residential community of Porter Ranch.

The UCLA study found that the high methane levels in Porter Ranch during the final weeks of the event coincided with — and likely influenced —  a broad range of air pollutants known or suspected to cause certain cancers, as well as neurological and respiratory effects.

"More than 300 natural gas storage fields within the United States use depleted oil wells, many of them aging, with very little oversight as to how they should be updated," said Michael Jerrett, the study's senior author and the chair of the Fielding School’s environmental health sciences department. "Given the potential for future events like the one that occurred at Aliso Canyon, it's essential that we continue to learn about the health risks both during these active blowout events and as residents who evacuate return to their homes."