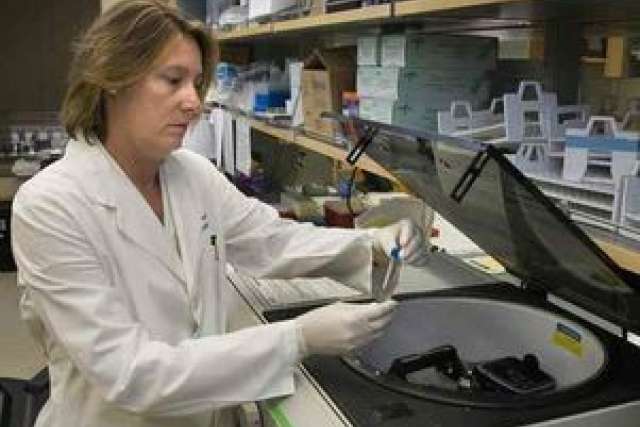 A study conducted by Dr. Rhonda Voskuhl, a UCLA neurologist, shows that combining estriol, a female hormone, with Copaxone, a medication currently used to treat multiple sclerosis, reduced the relapse rate of MS by nearly 50 percent with only one year of treatment.

Voskuhl presented the results of the preliminary Phase II clinical trial today at the annual meeting of the American Academy of Neurology in Philadelphia.

The randomized, double-blind, placebo-controlled trial involved 158 women with relapsing-remitting MS. At 16 sites across the U.S., one group of women was treated with Copaxone, a commonly prescribed, standard-of-care drug for MS, and an 8 milligram estriol pill each day; others received Copaxone and a daily placebo pill. After 12 months of treatment, the relapse rate for the Copaxone-plus-estriol group was 47 percent lower than that of the group that took Copaxone plus a placebo.

Voskuhl found that, after two years, patients taking Copaxone and the placebo began to show improvement, but those results took longer to appear and were not as strong as those of the group taking Copaxone plus estriol.

MS is an autoimmune and neurodegenerative disease that affects 400,000 people in the U.S. Relapsing-remitting MS, the most common form, can result in such permanent disabilities as loss of vision, paralysis and cognitive problems.

Current MS medications, which can cost patients up to $60,000 per year, have succeeded in reducing relapses and slowing the progression of the disease to some degree, but they do not halt the disease.

"I'm very excited by these results," said Voskuhl, who is director of the UCLA Department of Neurology's Multiple Sclerosis Program. "Currently, all of the available drugs reduce immune attacks on the brain, but none of them protects the brain. Estriol is particularly promising because it both reduces attacks and protects the brain directly. It's a two-pronged approach — an anti-inflammatory prong to reduce the attacks, and a neuroprotective prong to make the brain suffer less damage in case of an attack."

Earlier work by Voskuhl showed that, in mouse models with MS, estriol repaired brain cells by increasing the connections, or synapses, between neurons, which improved the transmission of information between the cells.

Estriol is also promising because it has an established safety record — it has been used for years in Europe and Asia as a hormone replacement therapy for women with menopausal symptoms — and it can be given as a pill, rather than as a shot, as most MS medications are. Although the pill is not yet approved for use in the U.S., the fact that it already exists and is a generic should dramatically reduce the cost of treatment, said Voskuhl, who holds the Jack H. Skirball Chair for Multiple Sclerosis at UCLA.

As a potential therapy for multiple sclerosis, estriol has had an unusual evolution. For decades, women with MS and their doctors noticed a curious thing: When they became pregnant, they experienced a sharp drop in their MS relapses, more of a drop than is observed with most of the currently approved MS treatments. That anecdotal evidence continued to mount over the years, and a landmark paper by a European group in 1998 described the protective effect of pregnancy on MS.

Intrigued by those findings, Voskuhl in 1996 conducted animal studies that identified estriol, which spikes during a woman's pregnancy, as playing a role in protecting the body from MS. Estriol is virtually undetectable in the body until pregnancy, when its production spikes; it is thought that the hormone helps suppress a woman's immune system during pregnancy so that the body doesn't treat the fetus as a harmful "invader."

Voskuhl followed that discovery with a 2002 pilot study in which 10 non-pregnant women with MS were given estriol pills. During the course of the study, the women experienced a 70 percent drop in the number of inflammatory brain lesions, which are a hallmark of MS.

"Most potential drugs go from the laboratory bench to the patient bedside," Voskuhl said. "In the case of estriol, though, it went from the bedside — patients talking to their doctors — to the lab bench, and then back to the bedside, in the form of a clinical trial. It's important that patients keep the lines of communication open to their doctors in letting them they know what makes them better. And it's important that we doctors listen."

Although Voskuhl said the results are promising, she added that they must be validated in a larger, Phase III trial.

Funding for the study was provided by the National Institutes of Health, the National Multiple Sclerosis Society, the Sherak Family Foundation, the Jack H. Skirball Foundation and the Conrad N. Hilton Foundation. The biotechnology company Synthetic Biologics Inc. provided and distributed the estriol and placebo pills to the 16 clinical sites.