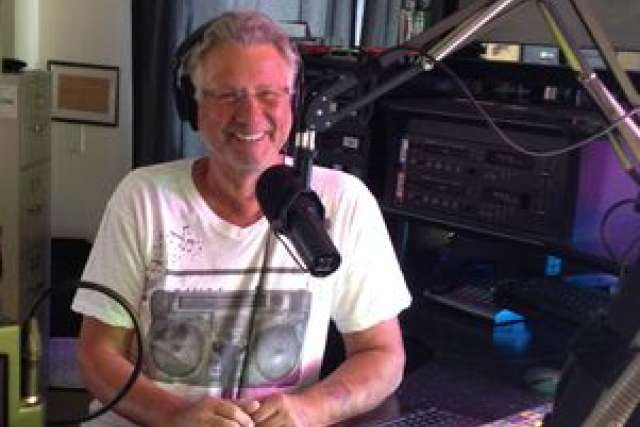 Because of the aneurysm’s location, a rare two-part surgery was recommended at UCLA. But the first procedure carried a surprising risk: It could damage his voice, as it involved rerouting the blood flow from his neck’s carotid arteries, which are in close proximity to the delicate vocal cord nerves.

The 40-year radio veteran developed the aneurysm as a consequence of a condition known as aortic dissection, in which the layers of the aorta, the main conduit the heart uses to supply blood to the body, separate and the artery weakens. He required lifesaving surgical repair when he was first diagnosed in New York in 2006. Aneurysms occur when the aorta balloons because of weakening or as the result of a tear. They tend to grow with time, increasing the risk of rupture, which can be fatal.

Although Fagin had no symptoms, CT scans used to monitor his condition showed that his aneurysm was growing again. Last year, it reached 5.9 centimeters, about the size of a tennis ball. He was referred to Dr. William Quinones-Baldrich, director of the UCLA Aortic Center and a professor of vascular surgery. Quinones-Baldrich’s team found that in addition to the aneurysm, Fagin’s aortic dissection condition was affecting the arteries carrying blood to his kidneys, resulting in the beginning of kidney failure.

The doctors knew they had to address both the aortic aneurysm and the kidney issue. The main goal was to correct the aneurysm by using a tubular stent graft made of special metal wire and sealing material, which would act like scaffolding to support the damaged inside walls of the aorta and block the flow of blood into the aneurysm. This reduces the pressure on the aneurysm, essentially eliminating the risk of rupture.

But before this could be done, Quinones-Baldrich had to perform a delicate procedure, one that included risk of stroke and vocal cord paralysis. He connected Fagin’s right carotid artery to two nearby arteries whose access to the aorta was going to be blocked when the life-saving stent graft was placed. This established an alternative blood flow to the brain and arm. Importantly, the nerves to Fagin’s vocal cords were carefully protected to avoid injury and the possibility of permanent hoarseness.

Fagin was relieved to wake up speaking in his normal voice following this first successful procedure, performed on Feb. 10. But while his DJ career and pursuit of voiceover work were safe, he still wasn’t out of the woods. The ballooning aneurysm continued to be at risk of rupture. Quinones performed the second procedure just a few days later, on Valentine’s Day. The team guided a special tube minimally-invasively through an artery in Fagin’s groin to the damaged area of the aorta. Once in place, the stent graft was expanded, providing support to the weakened aortic walls and stopping the aneurysm from growing.

Today, Fagin’s aneurysm has gotten smaller and doctors anticipate it will continue to shrink. His kidney function has markedly improved. He’s back in his DJ chair, hosting his Sunday midday show, “Classic Alternative,” which features an eclectic mix of music. He also walks five miles several times a week.

Quinones-Baldrich noted that even just a few years ago, patients like Fagin had very few options. Most were treated only with blood-pressure medications aimed at reducing the rate of the growth of their aneurysm. Still, in most instances, repair of the aorta is eventually necessary.

“Today, with advanced surgical and minimally invasive technologies, we can help address the needs of patients with complicated aortic conditions,” Quinones-Baldrich said. “We can offer more definitive alternatives, even if patients are considered high risk for traditional repair. We are pleased that Sandy’s procedures were successful and he is doing well. His voice in Laguna Beach was missed for only a very short time.”

As for Fagin, he’s planning on adding light weights to his workout and says he’s back to living in paradise, Laguna Beach. “I feel lucky to be alive and try to live my life to the fullest every day,” he said. He has even treated himself to a convertible and is enjoying life with the top down.