Q&A: David Gere and the fight to end AIDS 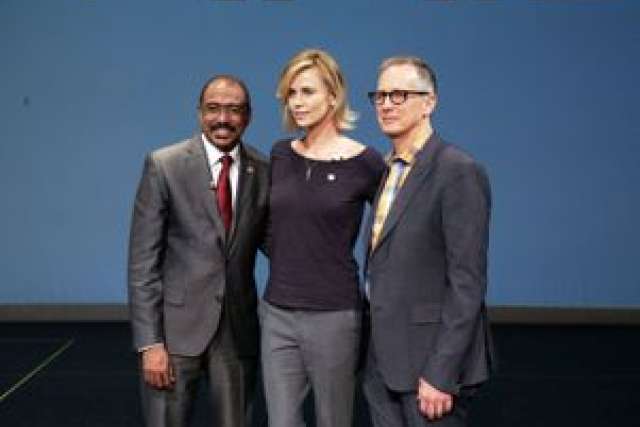 Through the UCLA Art and Global Health Center he created, visionary director and professor David Gere of the Department of World Arts and Cultures has used art and a network of artists to communicate his message about ending the AIDS epidemic around the world. On Tuesday, Nov. 18, before World AIDS Day 2014 (Dec. 1), Michel Sidibé, the executive director of the Joint United Nations Programme on HIV/AIDS (UNAIDS), came to Glorya Kaufman Hall to announce a plan to accomplish just that by 2030. South African and American actress Charlize Theron, the founder of an Africa outreach project and a designated UN Messenger of Peace, also talked about the progress that's being made in Africa. More than 100 people, from UCLA students to longtime researchers associated with the UCLA AIDS Institute, were at the event hosted by Gere and sponsored by the center. The new UNAIDS report, “Fast-Track: ending the AIDS epidemic by 2030,” maintains that nearly 28 million new HIV infections and 21 million AIDS-related deaths would be averted if the 2030 plan succeeds.

How would you characterize the UNAIDS plan to end the epidemic? Is it a realistic goal?
I would characterize the 2030 goal as “aspirational,” based on exciting data indicating that early treatment to reduce viral load substantially lowers infection rates. At the announcement, UNAIDS director Michel Sidibé  took out a strip of red paper as a visual aid to explain that global efforts have already managed to bend down the rising arc of the AIDS infection, but that now we need to “break” it so that it doesn’t spring back—a graphic and telling image.

Will the UCLA Art and Global Health Center play a role in bringing this goal to fruition?
Absolutely. The whole purpose of the Art and Global Health Center is to get creative people — artists — sitting at the table with medical and public health professionals. My argument is that artists can do three very important things: communicate life-saving information memorably, influence policymakers to do the right thing and reduce the stigma of HIV so that people will get themselves tested and treated. Early treatment is the key to the UNAIDS strategy.

Why did UNAIDS decide to make this announcement at UCLA?
The significance of that choice was not lost on me. UCLA doctors identified the first cases of a rare immunodeficiency, later called HIV or AIDS, in 1981. Now, in 2014, it’s up to us to commit to watching over the last cases of AIDS.

Let’s look at how your intervention in the AIDS epidemic began. I understand it wasn’t until you got to San Francisco at the height of the epidemic that you began to see art as a way to address a grievance or save lives.

When I arrived in 1985, it seemed that all the new art and performance in the U.S. was a response to the AIDS crisis. Joe Goode’s dances were about his dead friends. Ross Bleckner’s paintings looked like his search for a parallel spirit world. But it wasn’t just the new art. I would go see “Giselle” at the San Francisco Ballet, in which the main character, who had died from heartbreak, comes back as a haunting. I realized that everybody in the audience was thinking that this ballet, made more than 100 years ago, was about us and the hauntings we felt from the loss of our friends. That was when I knew that art could do more than be pretty.

Why was dance particularly well-suited to address HIV and AIDS?
A: In the mid-1980s, there were a lot of gay men in dance and a lot of gay men affected by HIV, though it’s certainly not a gay disease. The HIV retrovirus has no idea of your sexuality, your profession or who you are. But those in the dance world were deeply affected, and it was their chosen profession to use bodies to make their point. The body is where ideas, feelings and activism implode. The AIDS crisis brought out the latent potential in dance.

How did you end up at UCLA?
A: In 1993, World Arts and Cultures sponsored some performances by Meredith Monk, a multimedia artist and the subject of my master’s thesis. I came to give some lectures before her shows. A year or so later, the department chair Judy Mitoma invited me back as a visiting assistant professor to teach dance history. And I never left.

How did the initiative “Make Art/Stop AIDS” start?
A: While teaching at UCLA, I got my Ph.D. in dance history and theory at UC Riverside and wrote my dissertation on dance in the AIDS era. My UCLA department was supportive of my developing a course on that topic. We named it “Make Art/Stop AIDS,” and it is still bringing together students from all across campus, many different majors. It’s amazing to see them begin to think of themselves as artists and then to think about putting their creativity into world-changing activity.

When did you take your program abroad?
A: As I was turning my dissertation into a book, I thought maybe I wouldn’t work on HIV and the arts anymore because it was exhausting. But then I read a newspaper article about fears that HIV was about to explode in India. I had spent considerable time in India after college and still felt connected to it. I began to wonder whether some of the things artists were doing here might be applicable in India, where there’s a long tradition of activist art-making. So I went there on a Fulbright to find the artists intervening in the AIDS epidemic.

With a grant from UNAIDS, my friend Rajeev Varma and I assembled about 60 Indian artists in Calcutta, plus some UCLA faculty and grad students. We called the gathering “Make Art/Stop AIDS.” That was the birthing for me of a movement in which artists would marshal their creativity to try to stop the AIDS epidemic.

To commemorate World AIDS Day 2014, the UCLA Art and Global Health Center is presenting an evening of art, performance, storytelling and media on Dec. 1 from 7 p.m. to 9 p.m. at Glorya Kaufman Hall, Room 200. There will be art exhibits, a special appearance by the UCLA Sex Squad, and a presentation of photography and real-life stories from “Through Positive Eyes,” a project in which people living with HIV/AIDS share their stories to fight stigma across the globe. Tickets are $6 and can be purchased here.