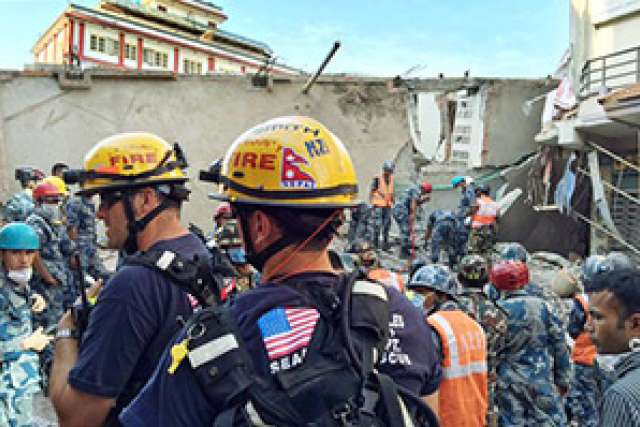 Hours after a magnitude 7.8 earthquake struck Nepal on April 25, Dr. Attila Uner, a UCLA associate clinical professor of emergency medicine, got the call to assist in a search for survivors as a volunteer member of the California-based Urban Search and Rescue Task Force USA 2. Deployed by the United States Agency for International Development’s Office of U.S. Foreign Disaster Assistance, the team consisted of 52 firefighters and paramedics and six search dogs from the Los Angeles County Fire Department, as well as three civil engineers and two physicians. Uner, who also helped in New Orleans after Hurricane Katrina, spent 19 days in Kathmandu and the village of Charikot helping with rescues. Harbor-UCLA Medical Center’s Dr. Nicole Bosson was the second local doctor.

How did your deployment unfold?
We got called Saturday morning [April 25, the day of the earthquake] and assembled in Pacoima with our medical supplies, drills, search cameras, gasoline, generators, radio equipment — tons and tons of equipment. We also brought along enough food and bottled water for three weeks, and six search dogs and all their food and water. We flew out of March Air Reserve Base [in Riverside] early Sunday afternoon on a C-130 military plan; 31 hours later we arrived in Kathmandu.

What did you find when you arrived?
I’d seen nothing like this before — collapsed buildings and quite a bit of devastation of world cultural heritage sites, all sorts of temples. We set up our base of operations on the grounds of the U.S. embassy with a command tent, medical and sleeping tents, and then we went to our assigned sector. Search and rescue teams from the United States, China, India and other nations were working in different sections of the city.

Did you set up a medical clinic?
We’re not a medical team per se. It’s our job to take care of the medical needs of the person being rescued and transport them to a hospital. It’s also our job to keep the team healthy. If you go to Nepal as a tourist, you’re going to have diarrhea. But rescuers can't afford to get that. So we’re all eating military food rations from a sterile pack and drinking bottled water. And we make sure that people aren’t getting too many mosquito bites, because there’s mosquito-borne encephalitis in Nepal.

I’m also responsible for the search dogs. Mostly Labradors, they’re trained to find only survivors and ignore dead bodies. The problem with the dogs is they’re really hyper — they want to please their masters by finding something. So they run and run and get dehydrated. Sometimes we need to give them fluid injections under their skin. The dogs are some of our most valuable search tools so we cannot lose them.

How do you decide where to search?
There’s a whole science to how buildings collapse in an earthquake. Ceilings collapse onto floors, floors onto ceilings. There might be somebody in the basement, in a little hole buried underneath all of that. Locals can’t dig with their hand tools. You have to tunnel in with drills and other tools through rock, walls and maybe even through a car or a washer and dryer — whatever’s in your way.

How do you look for survivors?
If they can, they scream because they’re terrified. Or they knock.  And people nearby usually know who’s missing. Someone will say, “My grandma’s in there,” or “I can’t find my kid.” If it’s a collapsed factory, they might realize that coworkers are missing. If they’re buried and don’t have any water, they won’t survive very long — maybe five days. If it rains and they have a little water to lick, they might live 10 days.

Dr. Uner's team helped rescue a 15-year-old boy who was trapped under rubble for five days in Kathmandu.

Do you have other ways to tell if someone’s in there?
We have search cameras — building endoscopes, basically a long stick with a camera on the end. The search dogs are very good at sniffing out the pile for survivors; “the pile” is what we call collapsed buildings. If a dog hits on something, we send out a second dog. If that dog hits on the same area, we start yelling to see if there’s someone down there. If we can’t see anything with our cameras, but the dogs keep (on it), we start digging.

What happens if you find a survivor?
Everybody’s happy, but we have to be really careful about pulling them out. They could die on the spot because of a condition called crush syndrome. If you have sustained pressure on a large muscle for over an hour, that muscle gets damaged and traps potassium and acid in it. The second you lift off the weight, blood flows back into the muscle. Then the blood with potassium and acid flows back to the heart, causing it to stop beating. To prevent that from happening, I put on all my protective gear and go down into the hole to give that patient medications before he is removed.

There were news stories about a 15-year-old boy who was rescued after being buried for five days. Were you part of that operation?
Yes. The local Nepali police force found him. They started digging and got close, but I think they needed tactical assistance, so the U.S. teams responded. The boy was entombed but not crushed, nothing heavy pinning him down, so no crush syndrome. He got some medications and was taken out.

Was your team also in Nepal when the second earthquake hit on May 12?
By that time, we were packing up because no one could still be alive in those buildings by then. We were waiting for our flight out to be arranged when the second earthquake hit. We all ran out of the hotel, which was shaking pretty badly. Then we got right back into rescue mode.

We were airlifted by military helicopters and taken 46 miles east to the small town of Charikot, which got hit hard. We dug out one lady whom we treated for crush syndrome, but we found no other survivors. They had about 40 dead in that town alone. The next day while we were waiting for our helicopter to get out, local rescuers started flying in survivors from a nearby town, so we had 26 people that we triaged. We finally got back to California on Friday, May 15.

What’s it like to take part in an operation like this?
It always feels good to help people who otherwise can’t be helped. I also learn a lot from the fire guys and engineers. I get a lot out of it. The other thing is that I’m an immigrant — I came here from Germany in 1993 looking for a better life — so this is me paying back for the fact that 300 million Americans took me in when I walked through that door.