Is the relationship between diet, intestinal bacteria and cells key to preventing systemic inflammation?

Mice fed a diet high in fat, cholesterol and calories, akin to the Western diet, had higher measures of blood lipids associated with elevated levels of inflammation, a new UCLA study finds. Researchers also identified clues to how the microbiology of the intestinal tract impacts disease-causing inflammation, suggesting that targeting the mucus interface between gut bacteria and the cells of the small intestine may be a novel means of preventing systemic inflammation.

The study was published today in the Journal of Lipid Research.

Inflammation is an important process that protects the body from invading infections and toxins. But in individuals who are successfully treated for HIV to the point that their viral load is no longer detectable, the continuing low-grade inflammation in the cells of the intestine contributes to the increased risk of heart attack or stroke in such people. These individuals have been found to have a “leaky gut” with more gut bacterial products in their blood such as the potent pro-inflammatory bacterial product known as lipopolysaccharide, or LPS, which promotes systemic inflammation that can accelerate the disease in arteries that leads to heart attack and stroke.

UCLA researchers previously used mouse models of treated HIV to study this problem. They found that adding a tomato concentrate called Tg6F to the western diet of the mice improved their “leaky gut” and significantly reduced systemic inflammation in the mice[1]. Tg6F contains a peptide mimetic of the main protein in HDL (“good cholesterol”).

To learn more about how diet is related to inflammation, researchers led by Pallavi Mukherjee fed half a group of mice a typical “western diet,” high in fat, cholesterol and calories, while the rest were fed the normal mouse diet, known as a “chow diet,” which is low in fat, cholesterol and calories. The researchers examined dietary phospholipids to identity causes of the associated systemic inflammation.

Dr. Alan M. Fogelman, chair of the department of medicine at the David Geffen School of Medicine at UCLA said, “we studied the portion of the small intestine known as the jejunum, because it is very actively involved in the uptake of dietary fats.” 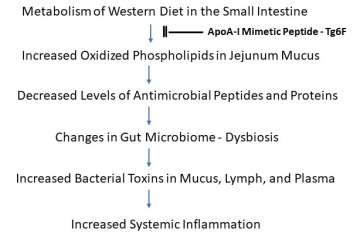 A schematic representation of how the metabolism of a Western diet in the jejunum of mice could lead to systemic inflammation.

Researchers hypothesized that the western diet-mediated changes were due to the formation of oxidized phospholipids in the jejunum. To test this hypothesis, they added oxidized phospholipids to segments of jejunum taken from mice on the chow diet. This reproduced the changes in gene expression seen in the jejunum of mice fed the western diet, which would account for the decrease in antimicrobial peptides and proteins on this diet. 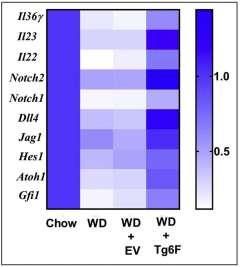 Tg6F prevents WD-mediated inhibition of genes that regulate the levels of antimicrobial peptides/proteins and the production of goblet and Paneth cells in the small intestine.

The authors say their findings suggest that targeting the mucus interface between the bacteria and the cells of the small intestine with peptide mimetics of the main protein in HDL may be a way of preventing systemic inflammation.