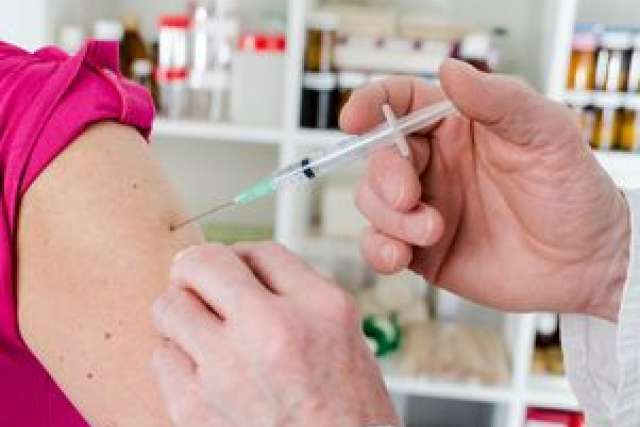 Requiring health insurers to pay for adult vaccinations given at retail pharmacies could help prevent the spread of deadly communicable diseases such as influenza, pneumococcal infection and human papillomavirus, according to a new study by the UCLA Center for Health Policy Research.

Many insurers do not cover pharmacy-administered vaccines; cover a limited selection of vaccines; or require people they insure to get vaccinated only at pharmacies within their insurance network, the study reports.

The overall vaccination rate among adult Californians is far below federal recommendations, according to the study. For example, the flu vaccination rate in California was 39 percent in 2015-16, 31 percentage points below the 70 percent goal set by Healthy People 2020, a federal health promotion program. The pneumococcal immunization rate for Californians 18 to 64 years of age who are at high risk for pneumonia (including smokers and people with asthma, chronic heart disease and chronic obstructive pulmonary disease) was 34.1 percent in 2016 compared to the recommended goal of 60 percent.

"California may be ahead of other states in pushing for health care expansion, but our immunization rates for communicable diseases is fairly dismal," said Gerald Kominski, senior fellow at the center and one of the study's co-authors.

Influenza and pneumonia-related illnesses contributed to an estimated 57,000 deaths in the country in 2015-16, making it one of the top 10 leading causes of death, according to data from the Centers for Disease Control and Prevention. In California, 324 adults under the age of 65 died of flu-related illness during the 2017-18 influenza season as of Aug. 4, according to the California Department of Public Health surveillance report.

While California's pneumococcal vaccination rate for those with a higher risk of infection is low for all major racial groups in the state, it is particularly low among Hispanics, 23.9 percent. Vaccination rates for human papillomavirus, a sexually transmitted virus that causes cancer, is significantly lower among women ages 23 to 31 who are Latino, black and Asian, compared to white women, according to previous research cited in the study. Also, the study reports the infection rate of vaccine-preventable Hepatitis B is three to four times higher among Asian-Americans than among other races. However, the vaccination rate for the disease among Asian-Americans, 11.7 percent, is higher than for blacks and Hispanics, which are in single-digit territory, 7.7 percent and 9.3 percent, respectively.

Barriers to getting immunized

Many barriers keep adult Californians from getting immunized, according to the study. These include:

Medi-Cal, the state's insurance program for low-income and disabled Californians, in 2016 approved paying for a wide range of adult vaccinations at a doctor's office or a local pharmacy. Pharmacists are required to inform the state immunization registry and the patient's primary care doctor about vaccinations given to the patient to avoid duplication.

Department of Health Care Services Medi-Cal Claims data from calendar years 2016 and 2017 suggest that since opening pharmacies to Medi-Cal Managed Care patients on December 23, 2016, the number of flu, pneumococcal disease and shingles vaccine doses administered has increased by 44.4 percent.

The study's authors recommend that the state Legislature require the Department of Managed Health Care and the Department of Insurance follow the lead of Medi-Cal and expand the insurance pharmacy benefit to include adult vaccines for all public and commercial insurance plans.

"Including pharmacy-administered vaccines as a covered benefit will help many adult patients who have financial constraints, transportation issues or are unable to take time off work during a doctor's office hours," said Ozlem Equils, a steering committee member at the Immunization Coalition of Los Angeles County and lead author of the study. "It's a step toward making adult immunizations more accessible for more Californians."