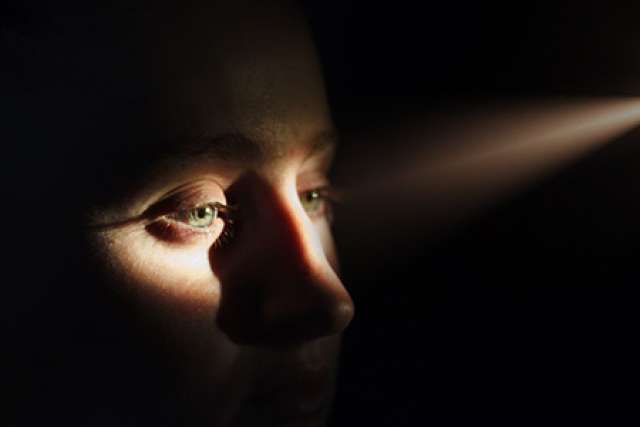 The UCLA study suggests that without the RGR opsin molecule, flashes of bright light would diminish our vision.
May 28, 2019
Estimated read time: 3 minutes

A study by researchers from the UCLA Jules Stein Eye Institute describes a molecular pathway that helps our eyes see continuously in bright light. The findings help answer a longstanding question about mammalian vision: Why don't our eyes become less sensitive when they're bombarded with bright light? The research, conducted in mice, reveals that a special molecule, which uses sunlight itself, rapidly recycles visual pigments after the pigments sense light and change structure.

To see, all animals rely on a molecule known as 11-cis­-retinal, which is present in both the rods and cones of our eyes. When 11-cis­-retinal is exposed to light, some atoms in the molecule move in response, changing the structure and forming all-trans-retinal molecules, which then triggers signals to the nervous system that our brain interprets as images. For the eye to sense light again, the molecule is then converted back to its original 11-cis­-retinal form. This is a slower process in rods than cones, which is why a sudden bright light in a dark room can momentarily "blind" a person. In daylight, however, that temporary blindness doesn't occur, suggesting there's a faster way the eyes can regenerate 11-cis­-retinal.

The researchers suspected that a molecule called RGR opsin might play a role in an alternative molecular pathway to regenerate 11-cis­-retinal. Using cells isolated from the retinas of mice and exposed to constant bright light, the team discovered that RGR opsin, together with a second molecule — Rdh10 — converts all-trans-retinal back to the 11-cis form when exposed to light. Notably, the reaction results in 11-cis­­­­-retinol, a slight variant of 11-cis-retinal. Only the cones of the eye, and not the rods, can then modify the molecule to the needed 11-cis-retinal.

The researchers noted that in mice that lacked the gene for RGR opsin, the cones in the animals' eyes temporarily lost sensitivity during continuous exposure to light — just as the rods do when exposed to bright light in the dark.

The findings are a critical step in the basic understanding of how humans see. They suggest that RGR opsin is needed for constant vision in the daytime; without the molecule, flashes of bright light would diminish our vision. The findings also have some clinical implications: The human gene for RGR opsin is mutated in a small subset of families with retinitis pigmentosa, which causes blindness. Blindness in these families may be caused by the loss of function of RGR opsin, and the study helps explain the protein's role.

The study was published in the journal Neuron.

The study was funded by a grant from the National Eye Institute and an unrestricted grant from Research to Prevent Blindness to Stein Eye.