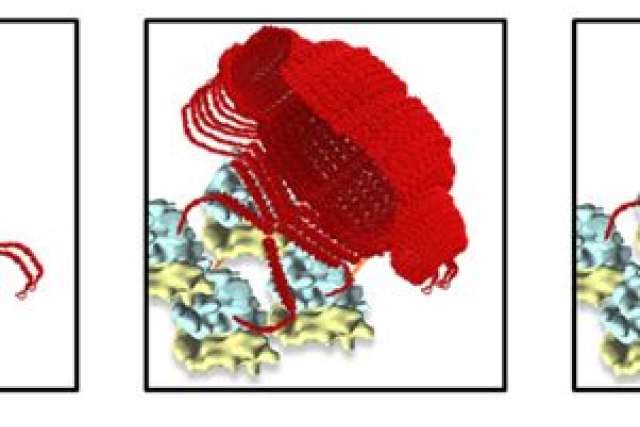 October 30, 2014
Estimated read time: 3 minutes
The first image shows the beginning of the process where four protein dimers are brought together on the polyribosome. In the center, half of the vault has been formed and at right the completed vault pinches off of the polyribosome."

The assembly of a vault particle on a polyribosome. The first image shows the beginning of the process where four protein dimers are brought together on the polyribosome. In the center, half of the vault has been formed and at right the completed vault pinches off of the polyribosome.

In the 1980s, professor Leonard Rome and his then-postdoctoral fellow Nancy Kedersha made a breakthrough in cell biology when they discovered vaults, naturally occurring nanoparticles — of a size measured in nanometers (1 nanometer = 1 billionth of a meter) — that are composed mostly of proteins and number in the thousands inside every cell of the body.

In the decades since, Rome’s team has discovered how to form vaults in the laboratory using the proteins they consist of. While naturally occurring vaults contain other elements, Rome’s team built empty ones, which eventually enabled them to pursue the idea of inserting drug molecules into vaults. Those could then be put in serum, injected into patients, and directed to specific cells where they release the drugs. Thus, vaults are being developed as a highly accurate drug-delivery system that is being commercialized.

But one question that Rome and his team couldn’t answer was how the natural vaults originally formed inside cells. Now Rome and his collaborators at UCLA’s California NanoSystems Institute appear to have solved that mystery.

In a study published online today in the journal ACS Nano, Rome’s team, led by first author and postdoctoral scholar Jan Mrazek, report data that suggests that polyribosomes — small molecular machines that read genetic information and form proteins inside cells — work like 3-D printers to both create and link together proteins and correctly form them into vaults. (Watch a brief animated explanation of how it works.)

“This idea needs some further research and confirmation, but it is a very elegant model and we are convinced that it explains how vaults are formed,” said Rome, who is associate director of the California NanoSystems Institute. “If the model is correct, it reveals something new about cell biology — that this polyribosome that has been known for 50 years has a heretofore unknown function. Namely, it orchestrates the assembly of macromolecular complexes such as vaults, and other structures in a cell that are made of multiple proteins.”

Mrazek said that this possible function of polyribosomes may also provide new understanding of protein aggregation, which is a clumping of deformed proteins that happens in such diseases as Alzheimer’s, Parkinson’s and Lou Gehrig’s.

“If a protein is not made correctly, it’s possible that these deformities can alter the guided assembly of macromolecules by the polyribosomes,” Mrazek said. “Once you understand that there is a machine in the cell that directs the formation of these macromolecular complexes, you can see where things might go wrong with that machine. By studying nanotechnology we have revealed something unknown about basic cell biology that might have wider implications.”