Researcher hits the streets in rapid response to spread of disease 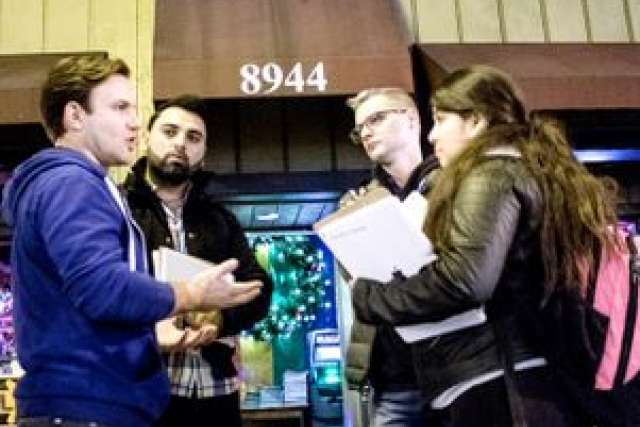 It’s the Tuesday night before Christmas as Ian W. Holloway tucks his 2-year-old daughter Sofía into bed and prepares to leave his home.

It’s time for Holloway, an assistant professor of social welfare in the UCLA Luskin School of Public Affairs, to get back to work.

Along with three UCLA student researchers, Holloway will spend the next several hours bar-hopping in West Hollywood for his latest research project. Their task will be to find and interview gay and bisexual men outside popular nightspots and discover how much they know about a current meningitis outbreak and the steps that health officials have taken to battle it.

Time is a critical factor. The team needs to complete about 500 interviews by February. The data they gather will be analyzed by March to inform a research brief that should help California produce better outreach and programs centered on meningitis vaccination for this population.

Holloway’s meningitis study is part of a four-year $4 million grant from the California HIV/AIDS Research Program to produce “what we call rapid-response research,” he explains. The idea is to complete research within months, not years, related to timely policy issues that impact people living with HIV or AIDS in California. The meningitis outbreak has led to two deaths since it was first reported last spring, and the researchers need to go where those most at risk can reliably be found.

For Holloway, the director of the Southern California HIV/AIDS Policy Research Center at UCLA Luskin, this type of on-the-ground research is commonplace. An academic research project involving bar hopping in West Hollywood may seem incongruous, but it is a proven research approach when the target audience is gay and bisexual men in Los Angeles County, particularly those who are HIV-positive. “We use a strategy called venue-based sampling,” Holloway explains. “It’s a systematic sampling strategy that is one of the best ways we know for how to approximate generalizability among gay and bisexual men.”

Outside Urth Caffé, Holloway helps student researchers establish a “line” at the corner of Melrose Avenue and Westmount Drive. Students then approach any man who crosses that line, asking them to participate in the research effort by spending 20 minutes answering questions using an iPad.

But foot traffic at Urth Caffé soon proves to be light. So the survey team moves to the next venue that has been randomly selected  — the Motherlode, a bar on Santa Monica Boulevard. But when that looks empty, the team goes around the corner to their "emergency backup" site, the Abbey, a West Hollywood landmark.

To gather enough surveys to produce statistically valid results by their deadline, Holloway has put together a rotating team of about 10 UCLA student workers. The majority are Luskin master of social welfare students; two are UCLA Ph.D. students. “We are looking for [student canvassers] who are obviously outgoing and who understand the importance of collecting good quality data,” says Holloway. The canvassers also need to be comfortable staying out to the wee hours to chat with strangers they encounter outside bars and clubs.

As noted on its website, the center works closely with community partners from AIDS Project Los Angeles Health and the Los Angeles LGBTQ+ Center to tailor research efforts to match urgent needs within the LGBTQ+ communities.

“We get community input, synthesize that and then set an agenda for policy research,” Holloway explains. “It is … very much aligned with the mission of Luskin and the mission of the Department of Social Welfare.”

Holloway’s passion to promote better health options for LGBTQ+ communities is an outgrowth of growing up in Northern California during the early years of the AIDS epidemic in America.

“Hearing and seeing what happened close by in San Francisco, I think it was pretty impactful for my young life,” Holloway recalls.

This type of on-the-ground research is commonplace for Holloway’s dedication recently led the Society of Social Work Research to select him to receive the Deborah K. Padgett Early Career Achievement Award.

The award recognizes social research work completed during the recipient’s first decade after earning a doctoral degree. “They give just one a year at the society’s big professional meeting,” Holloway says.

In addition to this study, Holloway is currently shepherding three other major projects:

Meanwhile, back on the streets of West Hollywood, students like Ryan Dougherty are learning about more than just health issues that impact today’s gay and bisexual men.

“You can spend all day in the classroom learning about research, but to actually do it and overcome the logistical barriers … is a really good learning experience,” Dougherty says.

At the Abbey, Dougherty attempts to flag down men who cross his survey line. Some ignore him. A few wave him off. One doesn’t qualify because he is not an L.A. County resident.

Then a young man in a white sweatshirt approaches. Dougherty catches his attention. The newcomer meets the research criteria and is willing to take the survey.

Nearby, Ian Holloway nods his approval. And the research interview begins.

This story comes from the UCLA Luskin School of Public Affairs website.