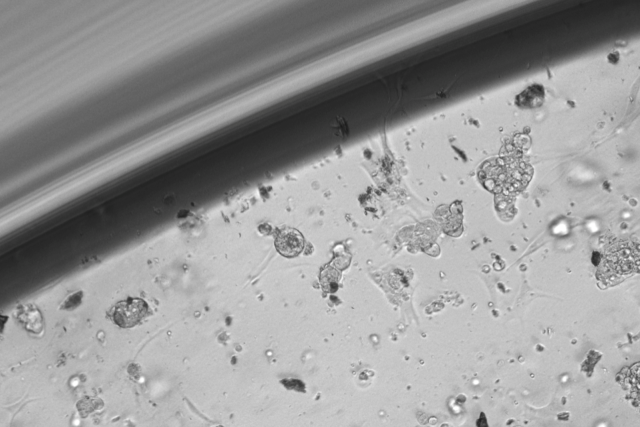 A new study adds to a growing body of evidence that organoids — lab-grown collections of cells that mimic a patient’s tumor — are a promising avenue for drug discovery to improve outcomes in patients with cancer, particularly rare cancers for which clinical data on drug effectiveness is often lacking.

Organoids are grown in a lab using a patient’s own tissue cells collected during surgery. These “mini tumors” are simpler, smaller versions of bodily organs or tumors that replicate the full-function structures. Scientists in the laboratory of Dr. Alice Soragni at the UCLA Jonsson Comprehensive Cancer Center have pioneered their growth and use to study diseases and possible treatments.

In the latest study, published online Wednesday in Science Advances, investigators led by Dr. Soragni obtained seven tumor samples from five patients with a rare bone cancer called a chordoma, which has few therapeutic options. Chordomas are tumors that arise in the sacrum or skull base. Their primary treatment is surgery, but because of their location, complete removal is not always feasible and recurrence rates are high. Chordomas do not respond to conventional chemotherapy, and their rarity (approximately one case for each million people a year in the U.S.) complicates running trials to identify effective therapies.

“There is a real need for clinically-relevant, personalized models to find therapeutics for chordoma and many other rare cancers,” said Soragni, who is an assistant professor in the Department of Orthopaedic Surgery and a member of the Jonsson Comprehensive Cancer Center. “Because this cancer is so rare and there are few models available, our ability to study how it responds to potential drugs is quite limited. What we have done is to optimize a platform to grow organoids using cells from the tumors to be able to investigate their biological characteristics and determine which pathways might be most promising for treatment by testing them against a wide range of therapeutics.”

As reported in the new study, investigators successfully created viable organoids from all samples. The patient-derived organoids showed morphologies and characteristics closely matching the actual chordoma tumors they were derived from, such as expressing a protein called Ki-67, associated with cell proliferation, and brachyury, a protein that is a well- established marker of chordoma.

The investigators then used the organoids to perform high-throughput drug screening, an automated drug discovery process that allows for large numbers of potential therapeutics to be tested at once, rather than one at a time, significantly accelerating the development and testing of potential targets and drugs. This type of large-scale screening has been key to drug development and testing but this is its first application to patient-derived chordoma organoids.

From the screening, the authors identified several drug targets and biological pathways that could be potentially pursued for therapy for chordoma. They also pinpoint the importance of a personalized approach, given the diverse responses seen among patients as well as between different tumors collected from the same patient.

“We’ve shown that the patient-derived tumor organoids we develop can be effectively screened against hundreds of drugs using our platform, which now includes machine learning approaches to study organoids growth patterns and pathway analysis to find targetable biological processes,” said Soragni. Over the past year, the laboratory of Dr. Soragni has extended its screening capabilities to be able to generate and test hundreds to thousands of drugs on tumor organoids each week thanks to funds from an NIH grant and the Department of Orthopaedic Surgery. “Our automation-compatible approach to grow and screen patient-derived tumor organoids works well for rare carcinomas (Phan et al, 2019) and now even slow growing bone tumors. Our work continues to be focused on generating individualized models for rare tumors, which often lack therapeutic options, with a long-term goal to leverage these results in clinic.”