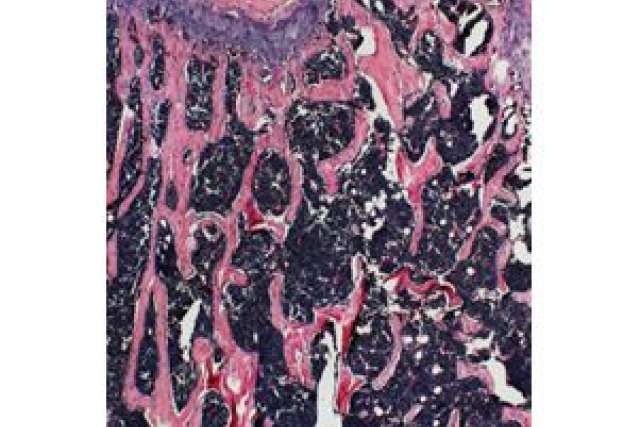 In the U.S. alone, approximately 54 million people over the age of 50 suffer from osteoporosis and aging-related bone loss, and the number of cases is expected to balloon to 64.4 million by 2030. Studies suggest that worldwide, 1 in 3 women over 50 will experience osteoporosis-related bone fractures, as will 1 in 5 men.

Osteoporosis is caused when the process of bone resorption, or the breakdown of bone, overpowers the process of bone formation. Bone loss is further exacerbated by chronic inflammation, often associated with aging. Most current osteoporosis medications are developed to slow bone loss by targeting the resorption. Researchers from the UCLA School of Dentistry have taken an important step toward a more effective treatment of osteoporosis. A research team led by Dr. Cun-Yu Wang, a UCLA School of Dentistry professor, is developing a novel therapeutic agent that not only slows down bone destruction, but also promotes bone formation by suppressing inflammation in the bone marrow.

The researchers discovered that a growth factor called Wnt4 that is secreted into the bone marrow effectively prevents bone loss in mouse models of osteoporosis and skeletal aging. It does this by inhibiting NF-?B signaling, a key pathway in the body’s inflammatory processes.

Wang’s team previously found that Wnt4 protein could promote bone formation; in the new study, they created a strain of transgenic mice in which the Wnt4 gene was overexpressed in osteoblasts, or bone-forming cells. As expected, those mice exhibited increased bone mass compared with the control group, and they showed significantly less bone loss in an osteoporosis model. Surprisingly, the team discovered that Wnt4 protein not only promotes osteoblasts, but also suppresses the activity of osteoclasts, or bone-resorbing cells, as well as inflammation in the bone marrow.

In order to understand the mechanisms of the action of Wnt4 protein, the researchers investigated its effect on NF-?B signaling — a key part of the process during osteoclast formation and bone inflammation. Mice with hyperactive NF-?B signaling developed arthritis-like symptoms and showed bone loss, but cross-mating these mice with Wnt4 transgenic mice effectively alleviated these symptoms. Wnt4 transgenic mice also displayed a slower decline of bone mass associated with advanced age. The team went on to show that Wnt4 protein could inhibit osteoclast formation in vitro by removing a protein important for NF-?B activation.

Dr. Wang is the No-Hee Park Endowed Chair in Dentistry and professor of oral biology and medicine at the UCLA School of Dentistry. He also is a member of the Broad Stem Cell Research Center at UCLA and holds a faculty appointment in the department of bioengineering at the Henry Samueli School of Engineering and Applied Science.