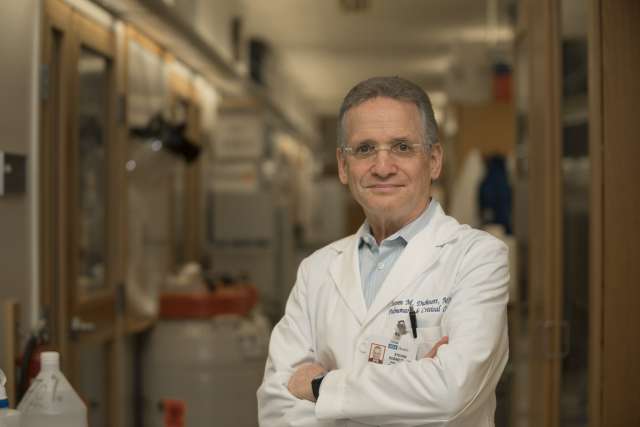 A product produced by lung cancer tumors fuels the cells that suppress immune function in patients and may be a target for Celebrex therapy, giving oncologists another weapon to fight cancer, according to a study by researchers at UCLA's Jonsson Cancer Center.

Researchers found that PGE2, which is produced normally by epithelial cells but at very high levels in lung cancer and other malignancies, up-regulates the activity of lymphocytes called T-regulatory cells, which suppress immune function, making it even harder for a patient to fight cancer. For the first time, UCLA researchers showed that PGE2 increases the growth and function of T-regulatory cells, making them more effective immune suppressors, said Dr. Steven Dubinett, director of the Lung Cancer Research Program at UCLA's Jonsson Cancer Center and senior author of the study.

The study appears in the July 15, 2005, issue of the peer-reviewed Journal of Immunology.

"We know that COX-2 inhibitors like Celebrex decrease PGE2, so when we discovered that PGE2 was fueling the T-regulatory cells, we knew we had a therapy we could test," said Dubinett, also a professor of pulmonary and critical care medicine and director of the Specialized Program of Research Excellence (SPORE) in lung cancer. "This discovery opens up the possibility that we could utilize relatively non-toxic drugs to augment immune responses in cancer patients."

The COX-2 inhibitors could be given with chemotherapy and immunotherapy drugs to help boost immune function in patients and help them to better fight cancer, Dubinett said.

Dubinett and his research team had hypothesized that PGE2 might be involved in suppression of the immune system. They first tested the theory in animal models and found that PGE2 was fueling the growth and function of the T-regulatory cells. Using Celebrex, researchers were able to decrease in number and function the T-regulatory cells by blocking PGE2. That study appeared in the June 15 issue of the peer-reviewed journal Cancer Research.

Dubinett and his team then validated their work in human cancer cell lines, the basis of the Journal of Immunology study. Again, administration of Celebrex decreased the number and function of T-regulatory cells, providing a boost to the immune system.

"Our data indicate that regulation of PGE2 production may in turn modulate T-regulatory cell development and function," the study states. "These findings suggest new therapeutic strategies targeting PGE2 in the prevention and treatment of cancer."

UCLA is launching a pilot study to further test their findings. Researchers are seeking 24 patients with advanced lung cancer to participate in the study. Patients would take Celebrex for a week so researchers can study the drug's affect on the T-regulatory cells. Patients would give blood before taking Celebrex and after the week-long course of therapy, giving researchers a clue as to whether the drug will function in humans the way it has in cell and animal models.

Dubinett said the clinical research study will begin to provide important information by determining if this therapy can contribute to augmenting immune responses in patients with lung cancer.

"If this research holds true in patients, it could provide a new avenue for using this drug in combination with other therapies to fight lung cancer," he said.