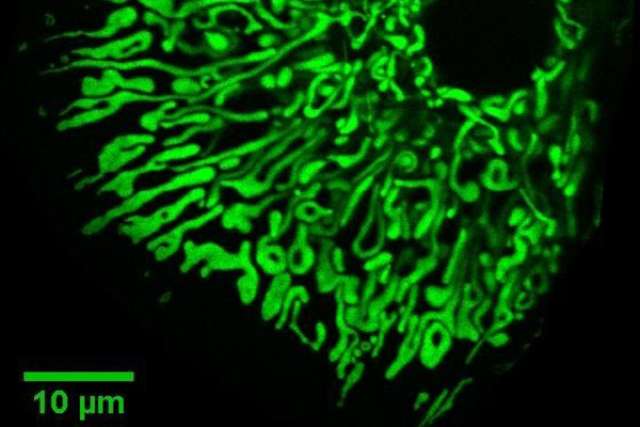 The findings are the first to show that ABCB10 transports biliverdin out of the mitochondria – the cell's "energy generating powerhouses." Biliverdin is the precursor of bilirubin, a substance with antioxidant properties. Consequently, ABCB10 transport activity causes an increase in bilirubin synthesis inside liver cells undergoing fatty liver disease.

Non-alcoholic fatty liver disease is closely linked to obesity and other disorders related to insulin resistance and is becoming increasingly common throughout the world, affecting an estimated 100 million people in the United States.

The liver filters everything that people consume and sorts it for the nutrients that will stay in the body or for the toxins that it will expel. The liver is also one of the organs richest in mitochondria – the small organelles in cells that convert food into usable energy through a process called metabolism. Consequently, the mitochondria produce high levels of free radicals, as well as antioxidants to keep these free radicals at healthy levels. Both free radicals and antioxidants play a key role in regulating metabolism and are elevated in insulin resistance and fatty liver disease.

One of these antioxidants is bilirubin, a yellow-bile substance that is released from the breakdown of biliverdin – its green-bile precursor. Bilirubin is produced at high levels in livers from people with fatty liver disease. Both biliverdin and bilirubin are found naturally in the body and released during the breakdown of heme – the deep red iron-containing molecule in red blood cells, which can be seen in the changing color of bruises – from green (biliverdin) to yellow (bilirubin).

In the study, the researchers removed the ABCB10 protein selectively from the livers of mice to test whether ABCB10 removal impacted the ability of obese mice to tolerate glucose, if they developed fat in the liver and how well the mitochondria in their livers were working to convert nutrients into usable energy.

In lean mice, the researchers found no difference in metabolism and health when ABCB10 was removed from their livers, while in obese mice they found that removing ABCB10 protected against insulin resistance and fatty liver disease.

Thirdly, the researchers found that when they restored bilirubin content in the mitochondria, the benefits on the function of mitochondria resulting from the removal of ABCB10 were reversed.

These findings shed light on the relevance of the association of some genetic ABCB10 variants with insulin resistance in Type 2 diabetes. While still very early to draw any conclusions, these findings could inspire the development of therapies that target ABCB10 or mitochondrial bilirubin in the liver to reverse fatty liver disease in obese individuals.

The study is published in the May 19 issue of Science Translational Medicine.