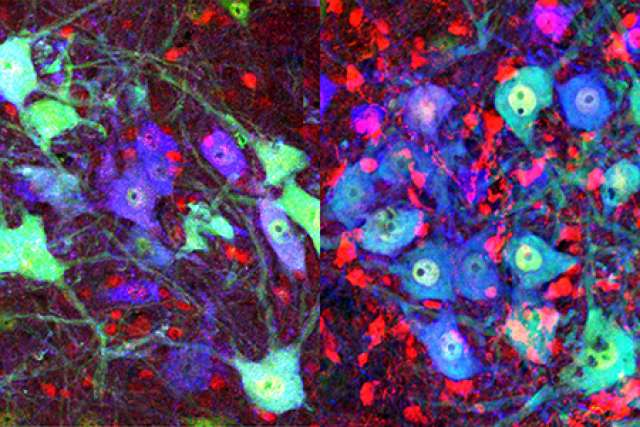 Image shows post-natal mouse spinal cord with the protein cofilin in red at left. At right, the cofilin (in red) has been inactivated by the gene Limk1. Neurons are shown in green and motor neurons in blue.
October 2, 2019
Estimated read time: 5 minutes

Twenty million Americans suffer from peripheral nerve injuries, which can be caused by traumas such as combat wounds and motorcycle crashes as well as medical disorders including diabetes. These injuries can have a devastating impact on quality of life, resulting in loss of sensation, motor function and long-lasting nerve pain. The body is capable of regenerating damaged nerves, but this process is slow and incomplete.

Now, researchers at the Eli and Edythe Broad Center of Regenerative Medicine and Stem Cell Research at UCLA have discovered a molecular process that controls the rate at which nerves grow both during embryonic development and recovery from injury throughout life.

The study, led by senior author Samantha Butler and published in the Journal of Neuroscience, used experiments with mice to show that it is possible to accelerate peripheral nerve growth by manipulating this molecular process. The finding could inform the development of therapies that reduce the time it takes for people to recover from nerve injuries.

Unlike the nerves in the brain and spinal cord, which are protected by the skull and vertebrae, the nerves of the peripheral nervous system have no such protection, leaving them vulnerable to injury. While the body has a mechanism to help peripheral nerves reestablish connections after injury, this process is slow; damaged nerves regrow at an average rate of just one millimeter per day.

The glacial pace of this recovery can take a tremendous toll on people's lives, as they may have to live with impaired movement and sensation for many months or years.

"People with severe peripheral nerve injuries often lose sensation, which makes them susceptible to further injury, and they lose mobility, which can lead to muscle atrophy," said Butler, who holds the Eleanor I. Leslie Chair in Pioneering Brain Research in the neurobiology department at the David Geffen School of Medicine at UCLA. "The process of nerve regrowth can be extremely painful and if muscles have atrophied it requires a lot of physical therapy to regain function. My lab seeks methods to accelerate this healing process."

In a 2010 study in mice, Butler and her colleagues discovered they could control the rate at which nerves grow in the spinal cord during embryonic development by manipulating the activity of a gene called LIM domain kinase 1, or Limk1. Limk1 controls the rate of nerve growth by regulating the activity of a protein called cofilin. Cofilin plays a key role in a process known as actin polymerization, or "treadmilling," which enables nerves to extend thread-like projections over long distances to form neural networks.

Butler's new paper builds on these findings by showing that Limk1 and cofilin also control the rate of growth of peripheral nerves during both development and regeneration.

"We discovered that one of the first things a nerve does after injury is switch on all these early developmental molecules that controlled how it grew in the first place," said Butler, who is a member of the UCLA Broad Stem Cell Research Center. "It's somewhat similar to how an adult in crisis might reach out to their childhood friends to renew themselves."

In preclinical tests using mouse models with peripheral nerve injuries, Butler's lab showed that this molecular process can be manipulated to make nerves grow faster. Specifically, they found that mice that were genetically engineered so that the Limk1 gene was removed exhibited a 15% increase in the speed of nerve regrowth following injury.

"This is a modest improvement for a mouse but one that could translate into a major improvement for a human because our nerves have so much farther to grow," said Butler, who noted that nerves regrow at the same rate in both mice and humans.

This increased rate of nerve regrowth resulted in faster recovery of both motor and sensory functions as measured by how fast the injured mice regained the ability to walk and the sensation in their paws. This is significant because sensory function can take longer than motor function to recover after a traumatic injury, yet sensory function is critical to quality of life.

As a next step, Butler and her lab are using human stem cell-derived motor neurons to screen for drug candidates that could modify this molecular process and speed nerve regeneration in humans. They are also expanding the scope of their study by examining if adding more cofilin — rather than inhibiting Limk1 — could be even more effective in speeding up recovery from peripheral nerve injuries.

The experimental treatment model described above was used in preclinical tests only and has not been tested in humans or approved by the Food and Drug Administration as safe and effective for use in humans.

Funding for this study was provided by the National Institutes of Health, the Craig H. Neilsen Foundation, the Merkin Family Foundation and the UCLA Broad Stem Cell Research Center Research Award Program, supported by the Jean Perkins Foundation.