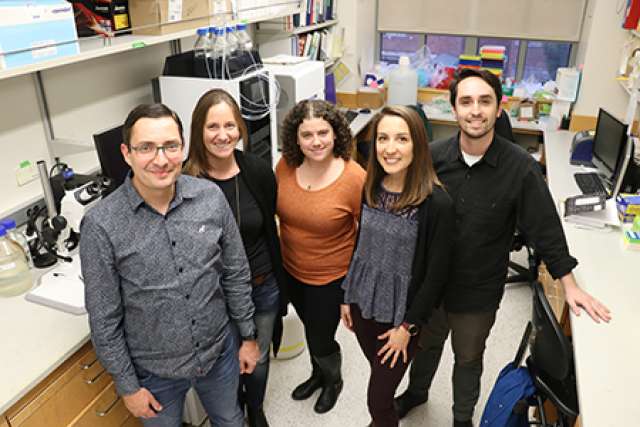 In a comprehensive, nine-year-long study in mice, researchers profiled more than 300 liver and plasma lipid species and more than 5,000 liver proteins. The combined data helped researchers to identify new mechanisms that control the metabolism of lipids (molecules that include fat) and to discover a protein that regulates lipids. They found that silencing one particular protein, called PSMD9, is a potential therapeutic strategy to reduce nonalcoholic fatty liver disease.

Nonalcoholic fatty liver disease is the buildup of excess fat in liver cells not caused by alcohol. The disease affects about 25 percent of individuals worldwide and at least 3 million Americans are diagnosed with it every year. Risk factors for the condition include obesity, high cholesterol and type 2 diabetes. Most people have no symptoms. Over time, inflammation and scarring of the liver (cirrhosis) can occur and could potentially require a liver transplant. Because of its significant impact on health, researchers have sought to better understand the causes of fatty liver disease, to identify a blood-based diagnostic test and to discover new targets for therapies.

Researchers studied 107 genetically modified mice to profile lipids and proteins in their livers. This approach allowed the researchers to test how genetics, rather than environment, accounted for differences in specific measures including blood and liver lipids.

There is no FDA-approved treatment for fatty liver disease. Doctors typically treat the underlying conditions, such as obesity, by recommending lifestyle changes. The research suggests that silencing, or blocking the expression of PSMD9 by using a patented technology may offer a new treatment. Additionally, doctors may be able to use the levels of the specific lipids in the blood as biomarkers for the diagnosis of fatty liver disease and the prognosis for those with the disease in at-risk populations and/or individuals.

The study's co-senior authors are Dr. Thomas Vallim of UCLA and Dr. Brian Drew of Baker Heart and Diabetes Institute in Melbourne, Australia. Other authors, including those from the University of Sydney in Australia, are listed in the journal article.

The study was published in the journal Nature.