Researchers prove lung cancer mutations can be detected in saliva 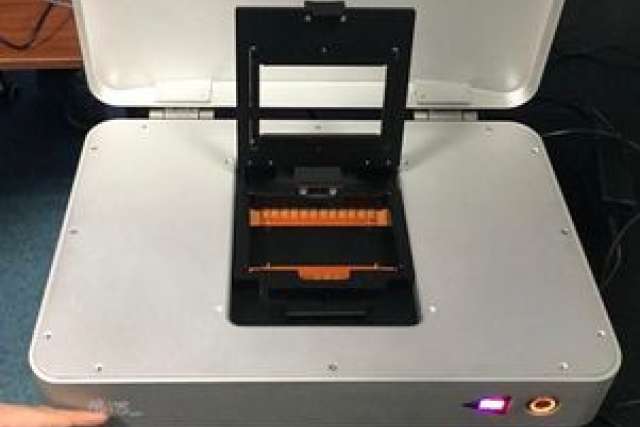 Confirming that saliva is just as accurate as biopsied tissues to detect treatable cancer mutations is a major step forward in the field of salivary diagnostics. Collecting and analyzing saliva is a non-invasive, inexpensive method in the early detection of many types of cancer. Lung cancer patients can particularly benefit from this method as lung cancer tends to be diagnosed in advanced stages and may be mistaken for other problems.

Researchers from the UCLA School of Dentistry and their collaborators performed a double-blind study on 37 people who have non-small cell lung cancer at three lung cancer centers in Chengdu, China. For each person, pre- and post-biopsy samples were collected for tissue and saliva cells. The researchers began by cataloging the biopsied plasma cells (from the lungs) using digital polymerase chain reaction. Next, the team cataloged the saliva cells using a proprietary UCLA-developed technology, called electric field-induced release and measurement (EFIRM) liquid biopsy, to see whether they could detect the same mutations as they did with the plasma cells.

The team found saliva detection correctly predicted the mutations in all 37 pre- and post-surgery saliva samples with 100 percent accuracy. The biopsied tissue predicated mutations with 70 percent accuracy. Furthermore, they found that the mutation signals in saliva were cleaner than in the biopsied tissue for L858R; and the tissue and saliva samples had clean separation for exon 19del.

“This study has confirmed the performance of EFIRM liquid biopsy using as little as 40 microliters of saliva for detecting EGFR mutations,” said Dr. David Wong, lead author on the study and the associate dean for research at the UCLA School of Dentistry. “We are confident that EFIRM liquid biopsy is just as effective at detecting cancer mutations as the current dPCR method of testing tissue. The results from this study show that we are even closer to using saliva to detect cancer mutations; and that saliva can be just as accurate as tissue.”

According to the World Health Organization, lung cancer is the leading cause of cancer deaths worldwide. In the United States alone, there are projected to be 225,000 new cases diagnosed in 2016. There is also a growing concern about the rise of lung cancer in women and in Asian countries where the frequency of cancer mutations is three times higher.

The clinical gold standard for detecting non-small cell lung cancer mutations is to perform a tissue biopsy. However, performing a biopsy incurs the risk of puncturing a lung, and for elderly patients the recovery time is long and difficult.

Other authors on the study were Fang Wei and Yong Kim from the UCLA School of Dentistry; David Chia from the UCLA Department of Pathology and Laboratory Medicine; Wei Liao from EZLife BioSciTech Co., Ltd.; Ziding Feng from the University of Texas MD Anderson Cancer Center; Dr. Youlin Qiao from Peking Union Medical College and Dr. Qinghua Zhou from Sichuan University.

Wong is the Felix and Mildred Yip Endowed Chair in Dentistry and the director for UCLA Center for Oral/Head & Neck Oncology Research at the UCLA School of Dentistry. He is also a member of the UCLA Jonsson Comprehensive Cancer Center.

Wong presented the team’s findings at the American Society of Clinical Oncology’s 2016 Annual Meeting on June 4. Prototypes of point-of-care and reference lab high-throughput platforms were on display at the exhibit hall at ASCO 2016.

David Wong is co-founder of RNAmeTRIX Inc., a molecular diagnostic company. He holds equity in RNAmeTRIX, and serves as a company director and scientific advisor. The University of California also holds equity in RNAmeTRIX. Intellectual property that Wong invented and which was patented by the University of California has been licensed to RNAmeTRIX. Wong is consultant to GlaxoSmithKlein, PeriRx, Wrigley and Colgate-Palmolive.