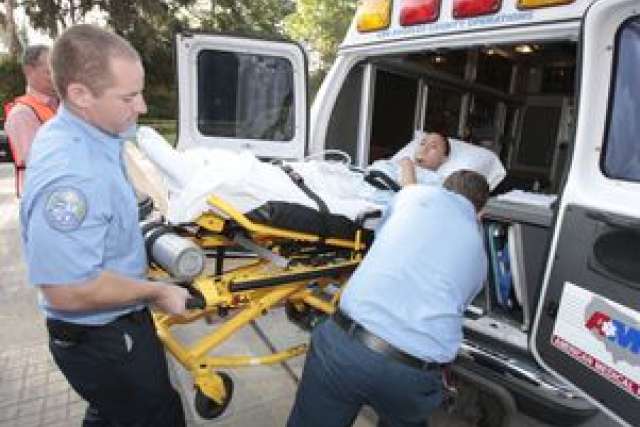 The move, which began early Sunday morning and lasted a total of seven hours, involved the transportation of both acute- and critical-care patients by shuttle, ambulance and mobile intensive-care unit, with appropriate medical staff support. Roughly one patient was moved every two minutes. The hospitals' emergency services choreographed the closing and opening of the old and new emergency departments with a 5 a.m. switchover.

"It took the dedication of our doctors, nurses and support staff to accomplish this phenomenal effort," said Dr. David Feinberg, chief executive officer and interim associate vice chancellor of the UCLA Hospital System. "Our world-renowned medical staff has always provided exceptional patient care, and we now have an exceptional building in which to provide the best patient experience to the community and the world for many years to come."

The patient move was the culmination of years of planning and coordination and involved millions of dollars worth of equipment, thousands of staff members and hundreds of patients. Planning at UCLA Medical Center began several years ago with careful reviews of all departments moving to the new hospital facility. UCLA created a list of approximately 650 milestones to accomplish — ranging from lowering the hospital census a week prior to the move to familiarizing 10,000 employees and volunteers with the layout and functionality of the new facility — in order to complete the transition to the new hospital.

"To plan a move of this scale, we conferred with other hospitals that have made recent similar moves to share ideas and plans," said Dr. James Atkinson, senior medical director of clinical operations at Ronald Reagan UCLA Medical Center and chief of pediatric surgery at UCLA Mattel Children's Hospital. "I don't know if one can truly imagine all that it takes to move a hospital from one location to another. It is a hugely complex task to transfer an acute health facility to a new building while providing seamless and uninterrupted patient care. It took more than 2,100 staff members, along with a dedicated hospital moving company, to accomplish this feat safely."

Many elements of the move took place during the two-week period prior to the hospital's opening to ensure the smoothest transition possible for both patients and staff. Many support services moved into the new hospital early to prepare the building. Transition planners also staged several mock relocations using patient stand-ins prior to the actual move.

"Although this has been an enormous and exciting project for all of us to be a part of, what really defines this hospital is its ability to serve the needs of the Los Angeles community like no other hospital can," said Dr. Gerald S. Levey, vice chancellor of medical sciences and dean of the David Geffen School of Medicine at UCLA. "The seismically safe facility incorporates 21st-century technology designed to lend maximum efficiency, patient privacy and a safer environment — making it a premier institution in the U.S., and therefore the world."

The 1 million-plus-square-foot, 10-story structure (eight above ground) is situated on four acres at the southwest corner of Westwood Plaza and Charles E. Young Drive South, on the UCLA campus.

About the UCLA Health

For more than half a century, UCLA has been recognized as a leader in patient care, medical research and teaching. UCLA Medical Center is ranked No. 3 nationally and has been rated the best hospital in the western United States for the past 18 years by U.S. News & World Report. UCLA Health physicians provide an array of cutting-edge, research-based primary and specialty services at four hospitals on two campuses and at more than 75 clinic locations. For more information, visit www.uclahealth.org.