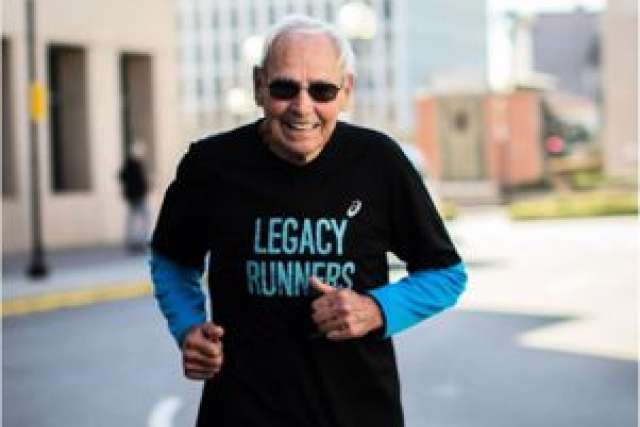 Claude Bruni has 98 marathon races under his belt, including every Los Angeles Marathon since 1986. Nothing can keep Bruni, who’s 80, from running.

Not even major surgery, as it turns out.

Last December, the retired owner of auto repair shop from Century City needed open heart surgery. But the 2017 L.A. Marathon was right around the corner, and there was no way Bruni would miss it. He told his doctor that his goal was to participate in the race that was only three months away — on March 19.

“I told him that I couldn’t see how anyone could recover from major cardiac surgery and run a marathon in three months!” said his surgeon, Dr. Richard Shemin, the Robert and Kelly Day professor and chief of cardiac surgery at Ronald Reagan UCLA Medical Center.

Bruni used to run marathons in just three hours, but last October he noticed that his training times were slowing down. He went to see his cardiologist, Dr. Andrew Watson, an associate professor of cardiology at UCLA, for a check-up. Tests showed that the aortic valve that controls blood leaving his heart was severely blocked, and the mitral valve was leaking.

“I had no idea I was so sick,” Bruni said. “I could have dropped dead in the street from a heart attack. Thankfully, my cardiologist was sharp enough to figure it out.”

Courtesy of Claude Bruni
Claude Bruni wore a shirt at the 2017 L.A. Marathon that honors the people at Reagan UCLA Medical Center and his cardiac surgeon, Dr. Richard Shemin.

On Dec. 12, he underwent a seven-hour surgery during which Dr.Shemin replaced the aortic and mitral valves, in addition to performing a two-vessel coronary bypass.

Soon after his surgery, on the advice of doctors, Bruni began walking short distances around the hospital to help speed his recovery.

After seven days, he left the hospital and immediately started a walking routine. Over the next weeks and months, Bruni followed the recommended cardiac rehabilitation regime  and started adding more miles to his routine — seven, then nine and finally15 miles. Two weeks before the L.A. Marathon, Bruin was able to walk and jog 24 miles.

Last Sunday, he stood at the starting line of the L.A. Marathon at Dodger Stadium with his son, Claude Jr., 50, who was running his second marathon. To honor the people who helped make his participation possible, Bruni proudly wore a blue T-shirt with the words “UCLA Cardiac Team — Valves Performance Tuned by Dr. R. Shemin” on the back.

“Everyone was yelling over the loudspeakers, and there was lots of excitement in the air,” recalled Bruni as he and his son waited with nearly 20,000 other participants for the race to begin.

For the first 13 miles of the race, Bruni and his son jogged. Although his heart felt very good and worked like a “Swiss watch,” he recalled, the pair slowed down around mile 19 and walked the rest of the course, finally crossing the finish line at Santa Monica Pier nine hours, six minutes and 37 seconds after leaving Dodger Stadium.

“This was the first time I’ve been in a race where they were cleaning up the streets before I passed,” he quipped.

While Bruni felt great, he admits he got a little emotional. “I wasn’t crying,” he explained, “but I was thanking God that I finished.”

The 80-year-old athlete is already beginning to train for his next race, aiming for a goal of completing 100 marathons.

“I can’t think of a better testimonial for older patients to be willing to take advantage of advanced cardiac therapies to live a full and healthy life,” said Dr. Shemin. “For Mr. Bruni, his marathon passion has led to a fantastic achievement.”